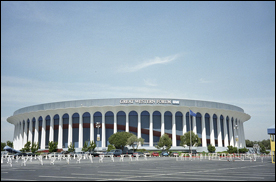 LOS ANGELES (CelebrityAccess MediaWire) — Madison Square Garden is in the final stages of a deal to purchase the 18,000-capacity L.A. Forum from its current owners, the Faithful Central Bible Church for an unconfirmed price of $23 million.

According to Billboard, an MSG spokesperson has confirmed the deal. "We have reached an agreement for the option to purchase the L.A. Forum, subject to due diligence and other conditions." the spokesperson told Billboard.

Also unconfirmed at the time of publication was the status of the venue's management deal with the forum's current operator, VenuWorks, who signed a five year agreement with the venue's owners in August 2010.

The iconic L.A. Forum initially opened in 1967. Known, along with Madison Square Garden as one of the most recognizable sports venues, the Forum initially served as a home to both the L.A. Lakers (NBA) and the L.A. Kings (NHL), both of which moved to the Staples Center in 1999. In 2000, the Forum was purchased by the Faithful Central Bible Church but still occasionally plays host to concerts and events.

Billboard also reported that Live Nation may be an investor in the deal, with some sources suggesting that the promoter may be laying out as much as $10 million on the deal. Billboard noted that Live Nation's deal with the Justice Department for the Ticketmaster Merger has Live Nation with a 10-year, multi-show commitment at the competing Staples Center, with stiff non-performance penalties. – CelebrityAccess Staff Writers