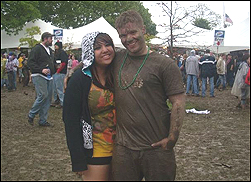 KANSAS CITY (CelebrityAccess MediaWire) — Heavy rains turned this year's Rockfest at Penn Valley Park into mudfest, and the resultant damage to the park's grass has left some local officials unsure if the event should return next year.

Held on May 15th, the 1-day outdoor festival featured performances by Godsmack, Three Days Grace, Seether and Papa Roach among others, attracting more than 50,000 fans to Liberty Memorial in the Penn Valley Park. Unfortunately, the combination of 100,000 feet and mud left ruts and heavily damaged grass, just two weeks ahead of the Memorial Day weekend, when a commemoration ceremony is planned for the site.

The festival's promoter AEG is contractually obligated to undertake repairs to the grounds. AEG has a good track record in this regard and reportedly paid $50,000 to repair similar damage after a muddy Rockfest in 2005. AEG pays the city $50,000 and another 50,000 to the war memorial museum to use the site.

"We have a great partnership with Liberty Memorial and Penn Valley Park," AEG's Larry Hovkic told WDAF. "And that's why we've been here for 7 years now."

Not everyone is thrilled with the prospect of AEG staging another Rockfest at the park next year and at least one member of the Parks Board, which oversees the festival sight has been vocal about her concerns.

"This is the straw that broke the camel’s back. They have decimated and desecrated,” parks board member Aggie Stackhaus told the Kansas City Star after seeing the damage left in the festival's wake.

Despite Stakhaus' concerns, the festival still enjoys solid support for next year among city officials. Kansas City Mayor Mark Funkhouser expressed his enthusiasm for the event on Tuesday, telling the KC Star that the festival was a welcome community event. “Keeping people out of our parks makes no sense to me.” Funkhouser added. – CelebrityAccess Staff Writers