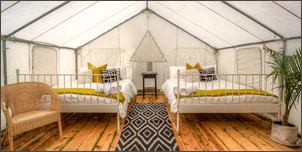 LOS ANGELES (Hypebot) –- The Researchist, a market research blog, recently took a look at luxury offerings at three music festivals, Coachella, Bonnaroo and Lollapalooza. Since I don't follow the luxury market and haven't gone to any of these festivals I had not realized the kind of amenities afforded those with money to burn. However, their brief report is somewhat of a mixed bag, presenting both true luxury items alongside offerings that are more upscale than fast food and a soda but are as much about shifts in the larger culture as changes in how luxury markets are served.

So Long Free Love, Hello Gourmet Food Trucks: The Luxe-ification of Music Festivals introduces a group of topics that can certainly be described as an upgrade of the music festival experience. Facilities and food choices are improving while ticket prices rise. In addition to that, luxury offerings are available that go beyond simple improvements and remind us that rich people like to party too.

The Researchist, a project of Group SJR, considers three areas, gourmet food, VIP camping and sponsored lounges. Perhaps they're simply using luxury as a shorthand for improvements for all attendees given the limits of even a long blog post but VIP camping is the only example they give of serving a true luxury market.

For example they mention the Bonnaroo Broo'ers Festival which is clearly a move towards better beer. But craft beer and Belgian imports have been taking the country by storm for a number of years and, to some degree, can be considered the mainstreaming of a product that has one foot in the natural foods movement and the other in gourmet foods. That's the combination that has made Whole Foods such a success but it's not a luxury market per se.

Gourmet food trucks are also mentioned which connect to the same "foodie" demographic of people of multiple class categories, except for the truly poor, who have become increasingly conscious of the seductive qualities of artisanal food and drink. Even Lollapalooza's Chow Town is similar to any number of food festivals that happen multiple times a season here in Asheville, NC. These changes in festival food can be attributed to a larger cultural shift in the national market towards such food options. It's great for festival goers but not a luxury offering per se.

Their discussion of sponsored lounges do point to a lot of options one would not have expected at an outdoor music festival in the past but the brands in question are mass brands – Heineken, H&M, Garnier Fructis, Dell, Playstation. Not a luxury brand among them. This shift in outdoor concert settings can be attributed to the move towards alternative forms of marketing that have become increasingly important over the last decade.

It's the VIP camping and hotel packages that truly serve a luxury market and, honestly, they're just scratching the surface of the possiblities.

Bonnaroo's Roll Like A Rockstar package (The Researchist says the price was a "rumored" $26,000) starts with private ground transportation from your choice of two airports, a private tour bus for up to 8 people, up to 8 special access tickets, 24 hour golf cart service with chaffeurs and so forth. That's festival luxury!

Looking to Coachella 2013, the Safari Tent On-Site Lodging is certainly a luxury option offering a 2 person tent with queen beds (see above thumbnail) at $6500.

Note that the highest end items, where listed, were all sold out. That suggests that there's room for more such offerings in the future. And, as The Researchist notes, these festivals are doing quite well financially which is an indicator that people across the board want a better experience whether or not they fit the luxury category.

Clearly music festivals have found a winning combination of improving conditions for everyone in settings where people often hope to have a once-in-a-lifetime experience with the potential for an even better one in the future. That's arguably why such festivals can do well in the midst of a recession. Adding luxury items to the mix is simply a smart way to build on well-managed popular festivals because, even in recessions, rich people love to spend that money.