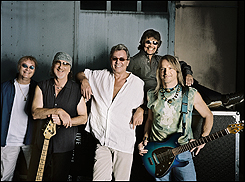 NASHVILLE, TN (CelebrityAccess MediaWire) — Heavy metal innovators Deep Purple have announced that they are in the studio, prepping a new album to be followed by a new tour.

The band's frontman Ian Gillan revealed that the Bob Ezrin-produced album will be a follow-up to 2005's "Rapture of the Deep."

"We’ve finished recording. It’s a new tone, it’s a new direction, it’s fresh stuff. I think it was all written and recorded in Nashville, and the reason we went there – not to make a country record, but because Bob Ezrin, our producer, lives in Nashville and so it made a lot of sense because he had all the studio facilities and back up and everything else. So it made it really easy…It was a great environment to record in and yeah, there’s a bit of diversity on the record. There’s some sort of… defining music is just so hard; it’s just really… it’s hard to define," Gillan told 100% Rockmagazine.

The album, their 19th studio effort, is set for release on April 30th by the German based label earMUSIC. The band will be supporting the release with a tour that will include dates in Australia, New Zealand and Europe through the spring and summer of 2013.

The current round of tourdates