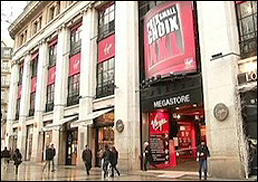 PARIS (VIP NEWS) — Virgin France is to declare itself insolvent, the latest music chain to fail against a backdrop of consumers shifting to buying music online.


The firm – not affiliated with Richard Branson's Virgin Group – has 25 stores in France, including a flagship outlet on the Champs Elysees in Paris.


It has already taken steps to terminate the lease on the Paris store and will hold a meeting with unions on Monday, a spokesman said.


The firm is currently owned by French investment firm Butler Capital. Butler bought 80% of Virgin in 2007 from French media company Lagardere, which had purchased the chain from Mr Branson's Virgin in 2001.


It is not the only music chain suffering.


Most have been struggling for a number of years, having been hit hard by the big growth in music and film downloads – legal and illegal – and by the rise in the sale of chart CDs and DVDs by the big supermarkets.


Virgin's main French rival, the Fnac chain, has also been facing difficulties. At the end of last year, it discontinued its Fnacmusic digital music download service, having failed to gain sufficient market share.


In the UK, music, films and games retailer HMV has warned that it faces an uncertain future in the face of continuing falling sales.


Our Price, Tower Records, Virgin Megastores, Zavvi, MVC, Music Zone, Andy's, Border's and Woolworths are all well-known names that have disappeared from streets in recent years. –according to BBC