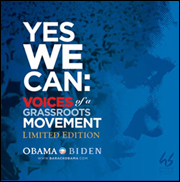 NEW YORK (AP) — Barack Obama's presidential campaign, which has inspired a multitude of songs by stars and amateurs alike, is now getting an official soundtrack.

"Yes We Can: Voices of a Grassroots Movement," which takes its title from an Obama campaign slogan, features Kanye West, John Legend, Sheryl Crow, Stevie Wonder and others. It will be available for sale exclusively through Obama's campaign starting Friday.

Proceeds from the CD ($24.99 for a digital download, $30 for a physical product) will help fund Obama's campaign until Nov. 4, Election Day, according Hidden Beach Recordings, which created the CD.

While most of the songs on the disc have been previously released — such as John Mayer's "Waiting On the World to Change" and Stevie Wonder's classic "Signed, Sealed, Delivered I'm Yours" — a few of the songs are new, including John Legend's "Pride in the Name of Love" and "Promised Land," a song by Malik Yusef featuring Kanye West and Adam Levine of Maroon 5.

The "Yes We Can" CD is only the latest musical project inspired by Obama. Earlier this year, an all-star music video featuring Legend, Scarlet Johansson, Kate Walsh, Common, and others, led by the Black Eyed Peas' will.i.am and titled "Yes We Can," became a viral sensation, garnering millions of views on the Internet. Will.i.am followed that up with another celebrity-filled video, "We Are The Ones."

There also have been songs by amateurs posted regularly on YouTube.com, while other celebrities — including Jay Jay French of Twisted Sister — have sung Obama-inspired songs. Recently, Dave Stewart debuted his own all-star video, "American Prayer," which featured Whoopi Goldberg, Barry Manilow, Forest Whitaker and Cyndi Lauper.

While Republican presidential candidate John McCain has had songs penned for him, such as "Lead the Way" by a lawyer named Judd Kessler, he has not inspired the same groundswell of musical support.

The McCain camp said it had no plans to release a CD of its own and greeted news of Obama's with a dig. "It's ironic that on a day when the economy is in turmoil, Barack Obama fails to release an economic plan, but instead chooses a celebrity rock album," said spokesman Tucker Bounds.

Obama said Friday he was holding off on detailing his plans for the nation's credit crisis because he did not want to risk roiling the markets at such a sensitive time.

After the election, the CD is due to be released through other outlets.