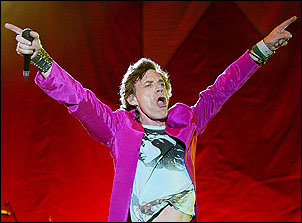 (CelebrityAccess News Service) — Chinese promoters have said they are trying to bring the Rolling Stones to the country in November after two concerts scheduled for April were postponed due to the Sars outbreak.

The Stones have never played in China despite regularly applying for permission since the 1970s.

They had been due to appear in Shanghai and Beijing – but pulled out after warnings over Severe Acute Respiratory Syndrome (Sars) from the World Health Organisation and Center for Disease Control.

"Our company is planning to bring them here in November," an official from local promoters Beijing Time New Century said.

"We are discussing it with the Rolling Stones, but there is nothing definite yet."

The band are currently in the middle of their Forty Licks world tour, which is going to Germany, Holland and the UK next.

The Stones recently headlined a benefit show for 450,000 people in Toronto, Canada, to boost the city after it was hit during the recent Sars outbreak.

When the China gigs were postponed, frontman Mick Jagger said the band had been looking forward to playing in China "for so long".

"We are very sad and disappointed not to be able to do these concerts," he said.

Almost 350 people died from Sars in China – but the last 12 sufferers were declared free of symptoms last week.

In March, organisers said the Chinese Government had banned the group from playing four of their best-known songs – Brown Sugar, Honky Tonk Woman, Beast of Burden and Let's Spend the Night Together.

The country's communist rulers once viewed rock and roll as "spiritual pollution".