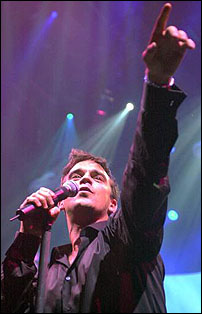 (CelebrityAccess News Service) — Robbie Williams has received rave reviews for the second of three record-breaking concerts, but fans have complained about chaotic organisation.

It took six hours to clear the car parks at Knebworth Park after his gig on Saturday night.

Some fans also left the venue before Williams appeared on stage because they had fears about overcrowding.

By the end of the weekend, Williams will have played to 375,000 people and his two performances so far have been warmly received.

But the first concert on Friday was marred by lengthy traffic jams on the A1 in Hertfordshire.

There were far fewer queues getting in on Saturday, but fans who arrived by car took hours to leave afterwards, and some complained they could not see the stage.

Huw Lynd-Evans e-mailed BBC News Online to say: "I have just arrived back home in Mansfield, Nottinghamshire, from Saturday's gig at 5.30am – this I expected!

"What I did not expect was not being able to see the stage from inside the venue!

"I'm definitely complaining to the promoters – this is a clear case of greed over common sense!"

A Hertfordshire police spokesman said they had spoken to the licensing officer and were happy the number inside the venue did not exceed the 125,000 limit.

One disgruntled fan said although he had entered the venue with no problems, he became concerned about his safety once inside.

Tony Nickeas, from Liverpool, said it reminded him of the Hillsborough football stadium disaster.

"There are kids who are coming out upset because they can't see anything at all," he told BBC News 24.

"I spoke to two young girls who actually got knocked over in the crush."

Another fan, Heather Burfitt, e-mailed to say: "The facilities and management at Knebworth, especially crowd management, were dreadful.

"Three times during the event I feared for our safety."

Terri Lawson left at 1930 BST after the "shambles".

She e-mailed: "By 6pm on Saturday night it was clear that there was no way you could even stand 'at the back' and watch on the screens."

But most fans were fulsome in their praise for the man himself.

Elizabeth Collinson, from Cambridge, said: "It was one hell of a night on Friday, one of the best, to be part of history was amazing. Well done Rob!"

On Friday the traffic chaos was blamed on poor weather, rush hour traffic and people leaving after work to travel to the concert.

Some fans were forced to listen from the hard shoulder and others spent six hours trying to get out of the car park.

But on Saturday most people arrived on time, because the hard shoulder and inside lane of the A1 were used exclusively for concert-goers.

Roads around Stevenage and Knebworth were closed to prevent concert-goers clogging up local routes.

The last of the three record-breaking concerts takes place on Sunday and organisers will be hoping to iron out many of the problems reported on Friday and Saturday.