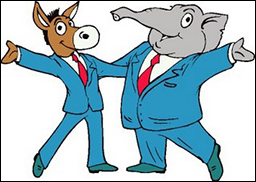 WASHINGTON D.C. (CelebrityAccess) — (Hypebot) – In a recent rare and purposeful show of bi-partisan support, the Fair Play Fair pay act was re-introduced, with the hopes of modernizing U.S. law as it relates to the regulations governing both digital and terrestrial radio broadcasts.

This is a purposeful mix of bi-partisan support that’s so refreshing in the current climate. What brought these Members together was a desire to modernize the U.S. rules governing music licensing for both digital and terrestrial radio broadcasts. Fair Play Fair Pay brings justice to the artists and musicians whose performances are exploited every second of every day on terrestrial radio with no compensation.

Not only would FPFP disrupt the antiquated legacy rules, it would plug the unintended consequences that has spawned seemingly endless litigation and commercial disruption. The new bill would establish a performance right and royalty for broadcast radio (with suitable protection for noncommercial stations), give guidance to courts that Congress recognizes that pre-72 recordings should attract a royalty like any other recording, and protect artists and producers for their share of statutory language while making a clear statement that nothing in the bill is intended to reduce payments to songwriters.

Here is a link to the prior version of the bill from the last session of Congress (HR 1733), and here is the summary of the new bill from Congressman Nadler: