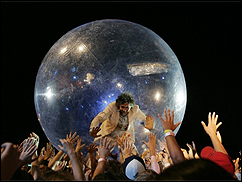 (CelebrityAccess MediaWire) – Street Scene San Diego will be returning to the park adjacent to Qualcomm Stadium next year, after a hugely successful reaction to the shows first new location after 20 years downtown.

The festival, which featured the Pixies, White Stripes, Snoop Dogg and the show-stealing Flaming Lips, may also be expanded in 2006, according to Street Scene founder-producer Rob Hagey. In an interview, he said he is considering the addition of an electronica and World Music stage, and also anticipates the return of the Bindlestiff Family Cirkus freak show, which made its Street Scene debut in 1998, and the drag queen extravaganza, which debuted in 2000.

“I think we’ll do more art and theatrical performances throughout the venue,” Hagey to the San Diego Union-Tribune. “Our overall goal is to make this very large venue more intimate and interactive, and still handle the audience size we have and not make it feel crowded. We’ll also have more of the roving drum troupes as well.”

The dramatic increase in venue size was a welcome one for fans, the event’s production staff and performers. Last year’s fete was held in the parking lots next to Petco Park, which, at 600,000 square feet, were not nearly large enough to comfortably accommodate the record two-day attendance of 105,000. This year’s attendance dipped to 75,000, but Hagey is convinced the move to Qualcomm was essential to ensure his event’s future.

“The new venue is amazing. We needed the extra room, because last year’s event was way too crowded,” the veteran promoter told the paper. He declined to comment if he lost money or was still able to break even with the lower attendance.

“The overall space was the key, and that’s what we lacked downtown. We also had the time to set the festival up and take it down, without dodging city buses and produce company trucks.

“Downtown became too congested for Street Scene. This location at Qualcomm is safe, it’s easy to get to and it has a lot of potential.” –by CelebrityAccess Staff Writers