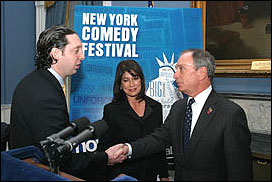 (CelebrityAccess MediaWire) — The New York Comedy Festival to be held from November 9-13 will honor the late Andy Kaufman by handing out the first ever Andy Kaufman Award to the individual who most closely reflects the originality, humor and courage of the late comedian. A panel of high profile judges, including Tony Danza, George Shapiro, Stanley Kaufman and Caroline Hirsch, will select an individual from across the country that breaks the barriers of conventional stand-up comedy by evoking emotions from the audience that range from agitation to enlightenment, sadness to elation, or from laughter to embarrassment.

Participating individuals should submit a tape of no more than 10 minutes of material. Selected individuals will then be asked to appear in New York City the week of the festival to perform live in front of an audience at which time a panel of judges will select the finalists. The finalists will then be selected to perform at Carolines on Broadway on November 11. The prestigious honor will be awarded that evening to the individual who most closely reflects the late Andy Kaufman as determined by the panel of judges. The judges will be looking at competitors for their own originality, humor and courage, not imitators of Andy Kaufman. The recipient of the award will receive a trophy along with a cash prize of $7,500, given by Stanley Kaufman, Andy's father.

All submissions should be sent on VHS tapes to: New York Comedy Festival c/o Carolines 1626 Broadway, New York, NY 10019. Submissions must be received no later than October 25. For more information on the Andy Kaufman Award visit www.nycomedyfestival.com.

"I am always amazed and quite flattered at the reaction of strangers -old and young- when I am introduced as Andy's father," says Stanley Kaufman. "They remember Andy for his courage and creativity in providing them with laughter that was different. It is my hope that this first Andy Kaufman Award will help cultivate a new group of individuals who will help perpetuate Andy's memory."

"It's been great fun and creatively rewarding for my partner, Howard West, and me to work with Andy Kaufman from the moment we met him in 1975, and the fun and creativity continues," George Shapiro, Kaufman's manager, says. The Kaufman family has come up with the perfect concept to honor Andy's memory by recognizing the individuality and courage of upcoming comedians. It is fitting that the first annual Andy Kaufman Award, as part of the New York Comedy Festival, will be presented in New York City where Andy started working out in the stimulating atmosphere of the New York comedy clubs."

"I'm glad to be part of a tribute to a good friend and great talent, Andy Kaufman," Tony Danza says. –Jane Cohen and Bob Grossweiner