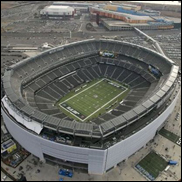 EAST RUTHERFORD, NJ (AP) — The New York Jets are doing away with paper tickets for season ticket holders and offering those fans a rewards plan for showing up regularly and behaving properly.


The high-end rewards include Super Bowl tickets and a trip to a road game on the team plane.


Other NFL clubs, such as the Broncos and Chiefs, already have gone to paperless access control systems. But as Seth Rabinowitz, the Jets' vice president of marketing and fan engagement said Tuesday: "Certainly we are the first to do this much."


That begins with a simpler way to enter MetLife Stadium. Season ticket holders will use wallet-sized smart cards that are loaded for 2014. No more paper that can get torn, wet or chewed up by the dog.


The program also will provide incentives for the season ticket holders to keep coming, with bonus points accumulating throughout a season. Once a fan has been to seven of the 10 home games, the rewards points increase significantly, right through the home season finale.


The program is not based on spending money for food or souvenirs, but on showing up, sharing what Rabinowitz calls a "sense of community" and comporting oneself properly at games. There will be bonus points for fans' involvement with the team's local broadcast partners, too.


While they don't reward spending habits, the Jets will provide point bonuses at the beginning of the year for seat locations: 1,000 points for the higher-level; 4,000 points for PSL holders; and 5,000 points for club seat holders.


"We want to get better at tailoring what we give them," Rabinowitz said. "They don't accept one size fits all, nor should they. The message is to come to the games and be a good fan — they don't have to do anything out of the ordinary — and their loyalty is rewarded."


The Jets' long-term plan is to expand the program beyond game day to include other events and tie-ins with sponsors.


Extra points will not be accumulated for attending preseason games, which traditionally do not attract full houses and often are attended by fans who are not season ticket holders. Rabinowitz said the Jets discussed that issue, but for 2014 there will be no separate segment of the program directed at the exhibitions.


Jets season tickets are nearly sold out each season. Longtime fans — the Jets have a few who have had season tickets dating to the AFL's Titans, and many more from their years at Shea Stadium — will be recognized in the program. They will receive extra bonus points for their loyalty, and the team plans to honor them at a game this season.


"They wear it like a badge of honor," Rabinowitz said of those fans. "In many cases, attending these games has come to define their lives."


With no appearances in a Super Bowl since 1969, the loyalty of those ticket holders can't be questioned.


Should a season ticket holder relinquish his seat or seats for a game, the fan attending can join the rewards program and set up a separate account, Rabinowitz said.


As for those attractive rewards such as the Super Bowl trip or attending an away game with the team or sitting in the owner's suite, they will be part of a rewards auction site. Other prizes with a set value, such as an autograph session, will be available through a rewards marketplace simply by redeeming bonus points.


"We are saying that we want you there and will reward you for coming, for cheering your lungs out," Rabinowitz said. "Hopefully, these rewards are like pennies from heaven."