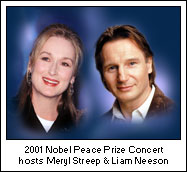 Popular arts channel TRIO, in association with sister network, USA Network, will present the exclusive US broadcast of "The Nobel Peace Prize 100th Anniversary Concert," hosted by Meryl Streep and Liam Neeson from the Spektrum in Oslo, Norway, taped on Dec 11 for a Dec 16 and Dec 21 airing in the US.

This annual concert, which is broadcast globally to approximately 500 million households, is a musical tribute to the year's Nobel Peace Prizewinner. The two-hour broadcast, which is produced by TWI, in association with TRIO, will premiere on TRIO on Sunday, Dec 16 at 8 PM, EST. An edited one-hour encore performance will air on sister network, USA Network on Friday, Dec 21 at 3PM, EST.

"On this, the 100th anniversary of the Nobel Prize for Peace, the world is not yet at peace," said Bill Haber, CEO and president, TRIO. "TRIO takes pride in presenting this very special concert event in tribute to the millions across the globe who continue to strive against great odds to make the Earth a better and more peaceful place.

This year's Nobel Peace Prize has been awarded equally to UN Secretary General Kofi Annan and the United Nations. Annan will attend the concert and join former Nobel Peace Prize Laureates who are present in Oslo for the Centennial celebration. His Royal Highness Crown Prince Haakon of Norway will open the Nobel Peace Prize 100th Anniversary Concert.

The Nobel Peace Prize Concert is organized by the Norwegian Nobel Committee in cooperation with NRK, the Norwegian Broadcast Corporation, IMG and Dinamo.