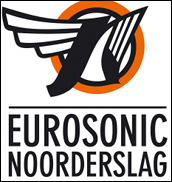 During the conference, the Netherlands will be discussed extensively to build trade relationships internationally with plenty of Dutch acts performing during the Eurosonic and Noorderslag
festival from January 12th through the 15th.

The first acts to be confirmed for the Focus on The Netherlands are Destine, DeWolff, Laura Jansen, Moss, The Black Atlantic and Tim Knol who will perform on January 13th and 14th in various venues in the centre of Groningen.

Various up and coming acts are also confirmed for Noorderslag and include Goslink, Houses, I Am Oak, Jungle By Night, Lola Kite, Lucky Fonz & De Felle Kleuren and Only Seven Left.

Festival organizers expect 2800 professionals from the European music industry and thousands of festival goers to see performances by more than 260 Dutch and European artists in over 30 different venues.