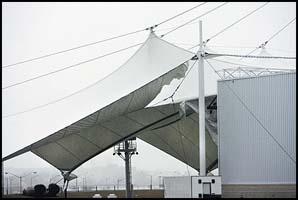 Officials say the tear occurred in the roof of the pavilion at Harbor Center during a storm a few weeks back. The tear is said to have been confined to one section of the roof. City officials said the section is on the left side, closest to City Hall, and that the rest of the roof appeared okay. City Engineer Richard Hartman reported that the re-engineered roof is behaving as designed, with the tear confined to the one section. The rest of the structure appears stable at this time. The cause of the tear is not known.

The builder had someone on site by Friday to inspect damages and report and the City says they plan to replace the damaged roof section well in advance of the 2007 season.

The original fabric roof was damaged during Hurricane Isabel in September 2003. Following Isabel, Portsmouth officials argued a design flaw caused the canopy to shred and sued the builder, which said it wasn’t responsible for the damage, saying an "Act of God" warranty clause did not cover the winds. It was re-engineered and officials accepted the new roof on August 1, 2004, and were given a three-year warranty on workmanship and a 10-year warranty on the fabric. The structure is also covered by insurance.

The City anticipates that the damage will be repaired well in advance of next season, with little to no cost to taxpayers because of the warranty and insurance.