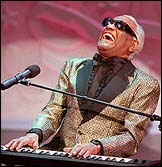 (CelebrityAccess MediaWire) — On June 17, Ray Charles, who died on June 10, will be remembered by his fellow Los Angelinos. A public memorial and viewing is scheduled in the South Hall of the Los Angeles Convention Center, from 12 noon to 8PM. There will be a book of condolences that the public is welcome to sign.

On June 18, an invitation only funeral will be convened at the First AME Church on Harvard Blvd. in Los Angeles. Willie Nelson, B.B. King, Clint Eastwood, Stevie Wonder, Glen Campbell, Cicely Tyson, Billy Preston and Rev. Jesse Jackson are among the entertainer's friends and associates who will honor him during the two-hour ceremony, which will also feature the Crenshaw High School Elite Choir and other program participants.

Los Angeles Mayor James Hahn and City Councilman Martin Ludlow, representing Charles' home district, will be among the 1,500 dignitaries and show business luminaries from around the world attending the 10 AM service.

After the service, Charles' funeral cortege will pass by — for one last time — his beloved studios at 2107 Washington Blvd. that were recently designated a city historical landmark. The funeral procession, accompanied by a 26-member motorcycle escort, will pause in front of the studios for one minute of remembrance before continuing its final journey to the cemetery.

"I love this place," Charles said in late April when Mayor Hahn gave him the historical landmark plaque. "It's the only home I've truly had for most of my professional career, and I would never leave it." –Bob Grossweiner and Jane Cohen

NEW YORK (AP) — It was only last year that Ray Charles performed at the Songwriters Hall of Fame awards show. This year, he was there in spirit. Artists attending the annual induction ceremony Thursday night remembered Charles, who died just hours earlier of acute liver disease, for his musicianship, his creativity, and his personality.

"It is a bittersweet night," said Wonder, who accepted the Johnny Mercer Award. "The cure for hate is love. And Ray Charles bought us a lot of love."

Later, before performing, Wonder told a crowded Manhattan ballroom that Charles "changed the world" with his hit songs "I Can't Stop Loving You" and "Georgia."

Charles, who was 73, received its Sammy Cahn Lifetime Achievement Award in 1993.

At Thursday's ceremony, composers and songwriters from a range of musical genres said Charles' mixture of blues, folk and country had been deeply inspirational.

"Another great singer, another great soul person has gone away," said Daryl Hall, who was inducted into the Songwriters Hall of Fame with partner John Oates. "He was one of the great 20th century songwriters. What he did changed music."

"Ray Charles has always been a part of our lives," Strong said. "Hearing about his passing saddens the moment."

(CelebrityAccess MediaWire) – Thomas Layton, longtime concert promoter in the Madison, WI music community, was found dead at his home on June 14 after he never showed up at the Annex for a Hank Williams III show, The Capital Times reports. He was 45.

According to the Dane County Coroner’s Office, Layton died of natural causes.

Among the acts he brought to Madison early in their careers were Nirvana, Sarah McLachlan, Pearl Jam, and others.

"The thing about Tom was he had a good eye for the next big thing as far as rock and roll went," Toni Ziemer, a close friend, told the paper. "He was really culturally aware and had great taste in music. He just kept with it. He kept on taking chances on the music. He kept on putting his money and his energy out there. He was a rock promoter, and that's what he did." – Jane Cohen and Bob Grossweiner

HONOLULU (AP) — Martha Poepoe Hohu, a conductor, composer, arranger, singer and organist who spearheaded the compilation of three Hawaiian hymnals and won numerous awards for her music, has died. She was 97.

Hohu received a Na Hoku Hanohano Lifetime Achievement Award in 1993. She also has the honor of being named a Kamehameha Schools Outstanding Alumna and is the recipient of a Hawaii Aloha Award from the Hawaiian Music Foundation.

She served for 67 years as the choir director at Kaumakapili Church in Kalhihi and also worked as a music teacher for Kamehameha Schools, a guide at the Bishop Museum and a docent at Washington Place.

(CelebrityAccess MediaWire) – Steve Lacy, a leading soprano saxophonist in the modern era of jazz and one of the few jazz musicians awarded a MacArthur Fellowship, the so-called “genius grant,” has died. He was 69.

Comfortable in various musical forms, Lacy played Dixieland and avant-garde, and with his own groups often incorporated beat poetry, the writings of Herman Melville and obscure Islamic verse.

“He was a distinctive player and a true original in this music,” jazz critic Nat Hentoff said. “He had an enormous appetite for the music and an ability to keep surprising himself by exploring new avenues.”

Influenced by such diverse forces as New Orleans-style saxophonist Sidney Bechet and groundbreaking pianist and composer Thelonious Monk, Lacy developed a beauty and clarity of tone, a keen melodic sense and an ability to keep his music uncompromising and fresh.

From the mid-'60s onward, Lacy was associated with the free-jazz movement and, finding little work in America, lived, wrote and recorded for much of the next four decades in Europe, primarily France, where he was awarded the Chevalier of the Order of Arts and Letters in 1989 and in 2002, Commander of the Order. –by CelebrityAccess Staff Writers

She founded MAP in the early '90s with her late husband, Buddy Arnold, who passed away last November.

He died at his home in Crestline, his son Jason Solomon said.

Bruce was arrested shortly before he was to perform at Howard Solomon's Cafe au Go Go club in Greenwich Village on April 3, 1964. Vice officers had recorded Bruce performing at the club earlier in the week.

Solomon and his wife, Elly Solomon, were also arrested; he was charged with allowing an obscene act to perform in his club.

Solomon pleaded innocent, but a three-judge Criminal Court panel passed down a guilty verdict against both him and Bruce in November 1964. Elly Solomon was acquitted.

After being sentenced to a $1,000 fine or 60 days in jail, Solomon took his case to state appellate court, where his conviction was overturned in February 1968.

Bruce also contested his conviction but died in August 1966 of a morphine overdose. Gov. George Pataki pardoned him in December 2003.

Solomon sold his club in 1969 and worked as a real estate developer in Florida before retiring to California in the early 1990s.