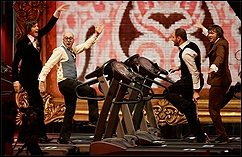 The new label will handle all distribution and promotion for OK Go's most recent album "Of The Blue Colour Of The Sky" which dropped in January.

"We'd like to thank the people at EMI Music who have worked so hard on our behalf," said OK Go singer Damian Kulash in a joint statement released by the band and EMI.

"We've really enjoyed our relationship with OK Go. They've always pushed creative boundaries and have broken new ground, particularly with their videos. We wish them the greatest success for the future.", the label added.

OK Go has released three studio albums since forming in 1998 and made a public splash with a 2006 viral video for the track "Here It Goes Again" which featured the band dancing on treadmills and netted them a Grammy for Best Short Form Music Video in 2007.

The band's departure from EMI should not be a shock for anyone who's been paying attention. Last month, the band's frontman Damian Kulash wrote an Op-Ed for the New York Times where he took EMI to task for making it harder for artist-inspired promotional efforts like the aforementioned video.

According to Kulash, the band produced and placed the video themselves which was technically a violation of their contract with EMI, which required that the label approve distribution of label financed songs. However, Kulash says, the label didn't get in the way and the video helped drive the band's success.

"As the age of viral video dawned, “Here It Goes Again” was viewed millions, then tens of millions of times. It brought big crowds to our concerts on five continents, and by the time we returned to the studio, 700 shows, one Grammy and nearly three years later, EMI’s ledger had a black number in our column. To the band, “Here It Goes Again” was a successful creative project. To the record company, it was a successful, completely free advertisement." Kulash wrote in The Times piece.

Kulash claims that EMI, seeing the videos as a potential source of revenue, went after YouTube, who agreed to pay the label a small amount per streamed view. The problem however, according to Kulash, was that YouTube was not required to pay for embedded YouTube videos that users incorporated into other websites, blog posts, etc. Since they didn't generate revenue, EMI reportedly disabled the embedding feature, which according to Kulash, dropped the viewership for the video by as much as 90%.

"In these tight times, it’s no surprise that EMI is trying to wring revenue out of everything we make, including our videos. But it needs to recognize the basic mechanics of the Internet. Curbing the viral spread of videos isn’t benefiting the company’s bottom line, or the music it’s there to support. The sooner record companies realize this, the better — though I fear it may already be too late." Kulash concluded. – CelebrityAccess Staff Writers