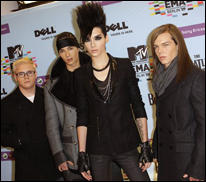 MOSCOW, Russia (VIP NEWS) — Two shows by the German pop-rock act Tokio Hotel at St. Petersburg's 12,000-seat Ice Palace and at Moscow's 16,000-seat Olimpiisky Sports Palace on March 10, was canceled at the last minute, allegedly due to a dispute between the artist and the promoter Top Concert.

The Russian newspaper Komsomolskaya Pravda reported that the band showed up at sound check earlier in the day but then packed their things and left, while thousands of fans were waiting for the show at the Ice Palace.

The BFM news portal reported that the promoter's representative addressed the audience from the stage, explaining the cancellation by "a sickness" of one of the band members and adding that the promoter did "all they could to make the show take place."

The band has put the following statement on their website: "The local promoter has once again materially breached and violated the contract. Under these given circumstances, it is not possible for us to let the band play the show in Moscow.

The band has now brought all meet and greet winners to their Hotel, and met their fans there. After giving autographs to the waiting crowd outside of the Hotel,


Tokio Hotel had to leave Moscow. Our heartfelt apologies to all Russian fans and the band."