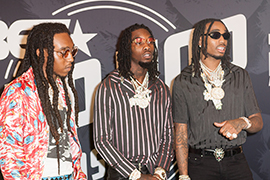 What does this mean for radio?

"Bad and Boujee" is number one on Spotify, even number one on the "Billboard" Hot 100, but it's nowhere to be found on the Mediabase Top Forty chart.

I'm fascinated by the Oscar nominations, because other than the voters and the media savants no one cares about these pictures. How can such a disconnect take place?

Both are run by old people, the Oscars and radio, and they want to believe they're hip, but they could not be more out of touch.

If I write anything negative about radio, my inbox fills up with lifers saying I just don't get it. As if waiting to hear one's song come on works in an on demand culture. As for personality radio, theatre of the mind, that's in podcasts, not over the air transmissions. All the story has been expunged from radio. But those involved keep saying it counts. And those in the industry, who grew up in the world of adds, kneel at the feet of radio, should they?

The Oscar organization has not realized its lunch has been eaten by television. That's where you go for long form story. Where personalities are explored and you get invested in real life. Movies are for popcorn releases, flicks made to play around the world, with special effects and comic book heroes and you're expecting the people who keep the industry alive to care about the Oscars?

But that's a baby boomer for you, talking out of both sides of his mouth, believing if they wear the clothes of their children they know what's going on.

The same media that trumpeted the effort known as Beats 1. Heard much from Zayn Lowe recently? The story is today's young 'uns don't cotton to radio, they want what they want and they want it now, but the oldsters keep playing by the old rules, when's it gonna change?

Sure, radio is the icing on the cake, a victory lap where you can make even more money, but songs that cross over from streaming services are hits there months later, appealing to the most casual of listeners, and we all know it's the dedicated who pay our bills. Used to be you listened to radio for the new releases, for exclusive announcements, now you go there to find out what happened last spring. When is it going to change?

The truth is streams count, they're all that matter, all sales are nearly irrelevant, because streams tell how much people are actually listening, they're the ultimate arbiter, they illustrate that Lady Gaga's new work is an incredible stiff, something the NFL could never fathom when it booked her for the Super Bowl, but they'd be better off booking Migos.

And radio spoon-feeding us tracks in a world where hit artists constantly release new material? Explain to me how this works?

The model is broken.

We have to bring everybody into the present. A fluid world where acts are built on streaming services and live there. Late night TV is a circle jerk. Why does everybody love Jimmy Fallon? When it counted, he punted, he didn't ask Donald Trump the hard questions, but he needs to be liked, whereas artists are edgy, hell, Migos's career was stymied by a member being in jail, and I can't say I approve of that, but it's definitely an illustration of refusing to color inside the lines.

Oldsters don't believe it until they see it in the newspaper. As if the reporters had a crystal ball wherein they could see truth. But too often reporters are harried writers with little expertise subject to the efforts of public relations people. There's no news there.

But there's plenty of news on the internet.

If only we had a chart for news on the internet…

But we do have music charts. And they show what people are really listening to. Why does radio, why does the industry ignore them? A hit is such the moment it's released, so why isn't radio playing Rag'n'Bone Man? Number one in many countries, they're waiting for the green light from the label, they're so behind the times it's not funny.

Music is about immediacy. When you capture that people are excited. We should all get on the same page and lionize that which is happening now, instead of confusing the customer. And if radio wants to survive, it must add tracks when they are new and turn over the chart more.

So the internet has disrupted music exposure, not only distribution. It's a hit first on the internet. Why can't we all accept and embrace this?