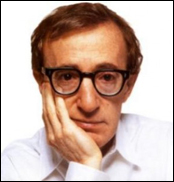 I still can’t get over the Soon-Yi thing, but people always tell me to separate the man from the art, and "Annie Hall" could be my favorite movie ever, so…

1. There was a fascinating story in Sunday’s "New York Times" quarreling with Malcolm Gladwell’s 10,000 hours theory (which was originated by a college professor in Florida, which Gladwell acknowledges.) These academics said you could not rule out IQ as part of the equation. They said the most successful people had high IQs. The rule isn’t rigid, as Bob Dylan so famously sang, "Each of us has his own special gift, and you know that was meant to be true, and if you don’t underestimate me, I won’t underestimate you.", but it tends to hold true. And I bring this up to question how Woody Allen got so successful so quickly. The documentary didn’t delineate every minute of his life, but he seems to have blossomed like a supernova, and in any event, he did it when he was still in his teens, still in high school. Yes, Woody started sending jokes to all the New York papers. And they ran them. And thus began his comedy career. Maybe you are born talented, if not great.

2. Woody was a terrible student. You can jump through all the hoops, get into an Ivy League school and get a gig at Goldman Sachs, but I’m doubtful you’ll ever be an innovator. You might make a ton of bread, but you’ve been conditioned to play the game. The greats think the game is b.s. and abandon it. Not only did Steve Jobs drop out of college, so did David Geffen and Irving Azoff. They don’t come any smarter than these three (which speaks to the point in #1 above!) And all three of them questioned the status quo and created new paradigms. Jobs’s achievements are legendary, but Geffen helped created DreamWorks SKG and Azoff rolled up all the management companies. If you’re not questioning authority, you’re a pawn in their game.

3. Not that Woody didn’t pay his dues. He spent years in the Poconos writing plays for summer theatre. He makes the point he didn’t wait for inspiration, he just got cracking, a play was needed for the weekend and he wrote it. Too many people wait to be inspired and they don’t develop the muscle that powers art. Your first song is not "Hey Jude", never mind "MacArthur Park". You write over and over again so that when you do get inspired, you can lay it down economically and perfectly, you can get it right.

4. Woody trusted his managers. He wasn’t a standup, but they insisted he become one. The story of the classic rock era is the story of managers. Whether it be Brian Epstein with the Beatles or the aforementioned David Geffen with Laura Nyro. Great managers are worth their commission. They inspire and direct you, you trust them. Sure, a great manager gets you a gig, but that’s only part of the equation.

5. Woody got into movies by accident. Shirley MacLaine dragged a producer to his standup gig in the Village and an offer came in to write "What’s New Pussycat". So you see, Woody did something he didn’t want to do, standup, and it led to something he did. It was a lucky accident. You’ve got to be in the game in order to achieve great results. If you’re in the game, you have no idea what opportunities will come your way.

6. "What’s New Pussycat" was a personal disaster for Woody, albeit a financial success for the studio. Woody vowed never to let anyone mess with his vision again, he wanted total control, he wanted to write and direct. His success allowed him to get this. You earn your power. But more importantly, our creative industries have lost trust in the artist. Used to be an A&R guy signed an act and shepherded it to success. Now, a label signs an act and remakes it to fit its own vision. If the execs had talent, they’d be artists. Musicians have to take back the power, musicians know best.

7. Woody Allen paid a lot of dues before he became a household name. But in music, we expect you to achieve worldwide domination the first time out. Woody got better and better, and his movies were ultimately informed by his experience.

8. Woody believes in collaboration. "Take The Money and Run" was saved by the editor the studio set him up with after being disappointed in the first cut. The artist commands the ship, but that doesn’t mean he doesn’t need help. No one knows everything. You can learn from those more experienced. But getting tips on how to recut your film is very different from a studio taking it out of your hands and editing it without you. Businessmen should hook up artists with those who will help them, producers, engineers, songwriters. They should try to aid the artist’s inspiration as opposed to quashing it. The point isn’t to say the work is bad, but that it can be made better.

9. The greats experiment. "Annie Hall" was seen as a risky departure from "Take The Money and Run" and "Bananas". But just like the Beatles, Woody wanted to stretch, wanted to go where he was uncomfortable to try and achieve his vision. The funny thing is no one is allowed to grow in music anymore, they’re just told to deliver more of the same.

10. Woody failed. He made the movies cheaply, so it wasn’t a disaster. Whereas if you get paid a million plus by the label and you don’t break through, that’s truly a disaster. And if you’re addicted to fame and you won’t take risk, your career is crippled. If you need all the money, don’t be an artist. You just need enough money to get it right.

11. Woody’s not married to the script. He allows his actors to change the lines, every word. Movies are inherently collaborative. Music can be too. Don’t be married to your vision. Not only can another’s idea be better, oftentimes it inspires you to create something better.

12. Supposedly Woody doesn’t read reviews. But one thing he does do is start a new movie before the previous one comes out. So he’s already moved on, it blunts the effect of both failure and success. You’re about the work, not the money and the fame.

13. Hits are lucky accidents. Not only did no one expect "Annie Hall" to be so gigantic, "Midnight In Paris" was Woody’s biggest success, long after he thought he could not achieve ubiquity. You just stay at it, you get lucky.

14. The movies never turn out like Woody wants them to, they never fit the vision in his head. He keeps trying, they keep disappointing. But the audience is unaware. What you might not like, what might frustrate you, might be loved by the audience.

The music legends fit the above paradigm better than the movie directors. We love Neil Young for all the reasons above. And Steely Dan fits in here too. The artists of yore were on a journey, they had a vision, they took input from others, but they owned the last word, the final cut.

The audience is waiting. It knows greatness.