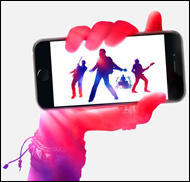 Jimmy Iovine delivered. For U2 that is. Some things never change, it all depends on who you know and establishing long term relationships.

But that will not make U2's new album a hit.

Why weren't tour tickets on sale today too? Why didn't Guy O. harness the momentum? Because the music business is always a couple of changes behind tech.

And in tech, nerds are cool.

Come on, did you see that guy Kevin Lynch demonstrating the watch? They let that guy out of the back room?

But the truth is most of us are uncool, so many of us are nerds, and today we inherited the earth. Apple's nerds blew away U2.

Not only were the nerds themselves cooler, without dyed hair and backup recordings, they realized it all came down to the product. U2's song was very good, but not good enough for more than fans.

The Apple Watch is for EVERYBODY!

Yup, analysts say Switzerland is in trouble, that no one needs a wristwatch anymore, and Apple recreates the category instantly!

If you don't want one you're blind.

And to use one you've got to have an iPhone.

Talk Samsung, talk Android all you want, but you're now left out of the coolest device on the planet, and will be locked out for years, until Google and Samsung and the rest of the competitors catch up.

I've seen too many of these Apple presentations. I'm waiting for a new art form to steal the mantle from tech the way tech stole it from music. But at least these guys in Cupertino listened to Bob Dylan, they know that he not busy being born is busy dying.

U2 still couldn't write a hit, after all those years. I feel sorry for them.

But at least they got maximum publicity. But that Super Bowl giveaway faded overnight.

But this is the new world. I want it now, today. The publicity run-up is so antique. Either you've got to be new and great, like Sam Smith, with your music selling itself, or you've got to play the Beyonce/U2 card, put out all your new music in one day, and ride the impressive tsunami of publicity.

As for physical product, as for $10 plus CDs…once U2 jumps ship, it's over.

Not that is not a stunt, not that it can be replicated, but…

We're finally living in a new era. Not only are CDs behind us, but Napster too. This new U2 album may be given away as files, but it's the last one, you can stream it on Beats.

So what did we learn today?

Despite years of rumors, despite tons of leaks in the last week, Tim Cook and his troops managed to wow us nonetheless. Sure, I want a watch, but I'm also eager to pay with my phone.

And that now Apple Stores will become jewelry stores. You think they were crowded before…

And that the watch was reasonably priced.

And that as good as the hardware is, it always comes down to software.

Yup, that's what U2 should be selling.

So once again, the techies, the nerds, the people we made fun of in high school, have proven that popularity is for pussies, that being a BMOC is secondary to studying, that ultimately we're gonna live in their world.

Yup, today it's all bout being SMART!

And smart takes education, and vision, and execution.

And you may use their tools, their mobile phones, and Facebook and so many apps, but there's a huge line between the purveyors and the hoi polloi.

And if you want to cross over you've got to not only be good, but great.

And I say to myself one more time what a wonderful world we live in, where people truly want to change the world and they do.