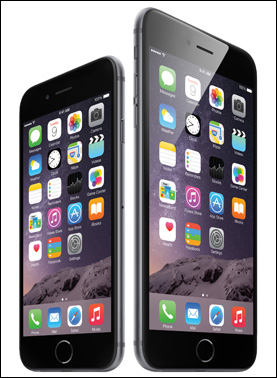 CUPERTINO, CA (CelebrityAccess) — After months of intensive speculation by tech media, Apple revealed the iPhone 6 and iPhone 6 Plus and their new iWatch during a live presentation on September 9th.

The phones also come with upgraded hardware, including the new A8 chip, offering better graphics performance and a better battery life than previous iterations of the company's smart phones. Networking has also been improved, with faster LTE download speeds of up to 150 Mbps available on the devices.

The new phones also include upgraded cameras with enhanced image stabilization and low light capabilities, as well as a new motion-sensing system that is designed to tie in with Apple's new iWatch products.

With the new round of phones, Apple is also introducing Apple Pay, which they are billing as a secure, one-touch payment system for both online and retail purchases at a brick and mortar store. Apple Pay uses the phone's built-in fingerprint sensor and a new onboard microchip that Apple contends will securely store a user's financial information.

Apple also showcased their new iWatch, a wearable that is designed both as a standalone product and one that integrates with its larger iPhone cousins. The watch comes in three flavors, and is built around Apple's mobile iOS operating system.

Controlled primarily though the watches' crown, the device offers users the ability to send and receive messages, answering calls to your iPhone and sending personalized voice and text messages.

The watch is also integrated with Apple's health and activity app and, when combined with the iPhone, can monitor the wearer's heartbeat and monitor and track multiple forms of exercise by the wearer, with the ability to suggest tailored workout goals and fitness milestones. – Staff Writers