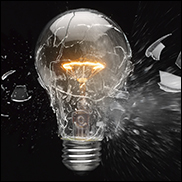 People make up their own facts, and if you call them on it they just double down. We live in a disinformation economy. The more data there is, the less we can come to a consensus.


Media will follow an irrelevant story if it makes them rich. Donald Trump has absolutely no chance of becoming President, never mind the GOP nominee, but major publications and talking heads can't stop talking about him because it brings in revenue.


One tragedy replaces another and everything runs together in a sea of iniquity.


Those up in arms the most are those least in danger.


Artists are two-faced. Taylor Swift can refuse to be on Spotify but is all over YouTube, what's up with that? Have the courage of your convictions Tay Tay.


Spotify is the devil. That's what the artists keep telling me.


Apple can screw up. The Watch is a joke and Apple Music is so bad it couldn't even distribute Swift's show properly, assuming you could find it to begin with. Steve Jobs was all about interface, making it simple, stupid. But it seems he came from a lost civilization that we may not revisit for millennia. Jobs was about eliminating options, now we've got so many choices, so much ability to customize, that not only do we not know how to use our devices/apps, we don't want to.


People gravitate to one winner. Hear anybody championing their Samsung Galaxy recently? Everybody's on an iPhone, with iMessage. And if you're about to send me hate mail telling me I'm wrong, I hope you like your low income no friends lifestyle, because all the winners are on the Apple platform, and you keep saying you want to win…


There's so much television to watch I view almost none of it. I stopped going to the movies long ago. And if you're not overscheduled, if you're not time-constrained, if you aren't overwhelmed with choice and obligation, you're dead.


They hate Obama because he's black.


We don't like outliers, those who raise their heads too high, we tear them down. Would Martin Shkreli have been arrested on securities fraud if he didn't raise the price of that drug so outrageously? Probably, but not this soon. Everybody wants to be rich and famous, Shkreli just got caught. If you've got money and are flaunting it, showing off, you're making a mistake. Hoard your winnings and hide. As for the Wu-Tang Clan selling its album to Shkreli..? That's the entertainment business in a nutshell, we don't care if you're a criminal, if you've got the cash, we're in business.


People are mad as hell and aren't going to take it anymore, but they're clueless as to the underlying facts of their condition. They just know they're unhappy and not doing as well as before.


College students think they're entitled to be insult free, that life should be as smooth and uneventful as their boomer parents told them it should be, in the car, driving to Dairy Queen after they got their trophy for landing in last place in the soccer league.


America laments every military fatality, but it tunes in on Sunday to see oversized gladiators bludgeon themselves to death.


Money is our religion. We play the lottery, donate to God and emulate and criticize those further up the economic ladder who keep telling us they earned it and are entitled to it.


You can't get a good ticket to a hot show at face value because the artists don't want you to. Ignore the double-talk, the truth is tickets to star attractions are underpriced and as long as they continue to be the public will blame Ticketmaster, the government will investigate scalpers, brokers will employ bots and nothing will change. You don't really want to know that a ticket to see Adele is worth a grand, do you?


Our mobile phones are our most valued possessions, they're the one thing we can't live without. It's all about connection and communication, but you think it's about money.


Style is bigger than music, everybody can be a star.


Abortion may be legal, but good luck trying to get one.


God will save us from global warming. Who cares if it's real or a fraud, the rapture is coming, despite the number of religious believers declining.


He who yells loudest gets listened to, because those who could contradict him are afraid of raising their head and appearing to be a blowhard. For everyone building a shrine to themselves on social media, no one risks being an outcast in service of the truth. Today's life is all about being a member of the club, the clique, where no contradiction is tolerated. America used to be the land of rugged individualists, today it's overrun with groupthink. Polls trump right and everybody's going where everybody else is. As for the punk outsiders complaining they're not getting notice…true believers challenging the status quo never complain, they just go on their merry way, sowing their seeds, waiting for the world to catch up with them.