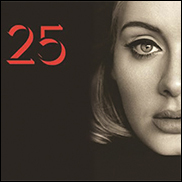 There’s been a huge focus on what’s hot as opposed to what’s good. John Seabrook delineated the “track and hook” singles that dominate today’s Top Forty, but could it be that old-fashioned melody, with memorable changes and a good vocal, is what most people really want to hear? Could it be that trendiness is what is putting the music business in the dumper?

You’ve got to get the message out. And Adele had a complicit press, which was intrigued by her pursuit of a sales record. But with it being so hard to break through and dominate, many have focused on the penumbra, when it’s always been about the music. Yes, you can connect with your fans who will support you, Amanda Palmer is the greatest exponent of this, but most people have never heard her music and when they do they don’t want to listen further. You can build it for the hard core, but if you want everybody else to care, you’ve got to go back to the songs and the performance, the melody and the talent.

4. TODAY IS NOT AS IMPORTANT AS TOMORROW

We don’t know if anybody will be listening to “25” tomorrow, and we have no way to measure said listens. We’ve always known the money in music is in the long game. That’s why publishing counts, that’s why some oldsters can clean up on the road, selling out arenas, and others play clubs, if at all. Longevity is an amalgam of credibility, talent and underlying catalog. The more hits you have, the longer you last. Sell out and your career is shortened. That’s right, despite percentage-takers saying the public does not care, the truth is people believe in musical artists in a way they don’t believe in actors. Adele’s image is burnished by not doing endorsements, by not taking the money, she lives on a higher plane. But in our short term economy everybody says to take it now, for it might not be there tomorrow. But your career might not be there tomorrow… And “25” might not be there tomorrow. History is littered with albums that ran up the chart and fell off nearly as quickly. Now that the music is out, we’ll see if it’s embraced by the public. I’m not saying it won’t be, but no amount of hype, especially about sales figures, is going to make people listen to a record. There’s been too much focus on short term money, the big money is in the long term, never forget it.

Adele can keep her music from streaming services, but can you?

Superstars are in short supply. Therefore their value has skyrocketed. We all want a piece of the big kahuna, we all want to belong. There’s only one Adele. Focus on your uniqueness, me-too disappears easily. And know that the spoils go to the rich, and the rich define the game. Adele can tour stadiums or clubs, paperless or at stratospheric prices. We tend to extrude from stars paths the unwashed can follow. But the truth is stars are different, and if you want that power you have to become a star too. And the greatest stars are sui generis.

6. THE PRESS LOVES A HORSE RACE

That’s what got everybody excited, the race to break ‘N Sync’s record, it dominated the discussion, the music took a back seat, if it was mentioned at all. Proving that media is dumb, they want it bite-sized and related to math. And then they’ll write all about it and the public will get caught up in it and… This is not good for music, because we want people talking about the tunes, not the sales.

Our business is youth-oriented to its detriment. Sure, kids are impulsive and easy to reach, but oldsters have money and care too.

Slow-moving and over-researched, radio cannot react quickly. And sure, radio went on “Hello,” but the truth is the track lived online, on streaming services, on YouTube. Play to the people, not the middlemen. Furthermore, people don’t want to be spoon-fed, they want it all and they want it now. Which is why Justin Bieber’s new album dominates Spotify, as did the Weeknd’s before it. Radio is an old game that doesn’t square with today, the more you stretch hits out over time the more you lose touch with your audience. If radio was smart, if it wanted to survive, it would play all the new hits right away and throw over what’s successful for new stuff quickly, like Top Forty did in the sixties. That way radio will become relevant and help build careers. But by putting money first and refusing to take chances, radio is sounding its own death knell.

There was an inane story in yesterday’s “New York Times” stating that Bieber and Selena Gomez resuscitated their careers via social media:

No they didn’t, they did it via YouTube and Spotify. If it’s good, we want it, we can’t find enough good stuff. And sure, Adele kept her album off streaming services, but it’s only a matter of time before she caves, after the sales fade and she wants continued listening. If she’s smart, she’ll make the leap soon, while she can still set records, because that’s what her team seems to be into.

10. IMAGE IS NOT AS IMPORTANT AS MUSIC

This is a huge sea change in the post video world. Thin and beautiful never hurt, but they’re no longer a requirement. Just ask Meghan Trainor and PSY. A catchy tune breaks through all barriers.

Taylor Swift did a good job of keeping herself atop the news cycle, but she too is a party of one. The media will now move on to another story, and “25” will succeed or fail based on its quality and whether it is embraced by the public. Music is not movies, it can’t make all its money in a weekend, and when done right it lasts forever. Adele employed the media to get the story out, to carpet bomb the world into awareness, but now she’s on her own. So start with the music, the story comes second. And a story might gain you attention, but it does not ensure longevity. We’re looking for a few good songs, that everybody knows and can sing along to. It ain’t hard to do, assuming you have the chops and inspiration. And the chops require a huge input of time, never forget Adele spent years in music school, and inspiration…that comes from living your life. Which is why the youngsters rarely have anything to say. We want you to channel the human condition, we want you to make us feel like we belong, that you understand us and will never betray us. That’s what Adele did with “21,” and that history gave her a good start with “25.” The success of “25” still hangs in the balance, despite the sales records, despite the media coverage. Will the public hold the songs near and dear to their heart, will they need to see her in prodigious numbers years from now? We’re going to find out!