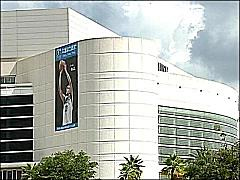 ORLANDO, FL (CelebrityAccess MediaWire) — The City of Orlando is looking to enhance its entertainment offerings by construction a new arena, performing arts center and refurbing the existing Citrus Bowl. To help defray the $1.1 billion dollar price tag for new venues, the city has indicated that they looking to divest themselves of some of their older facilities, including the Amway Arena and the Bob Carr Performing Arts Center.

According to the Orlando Sentinel, city administrators are confident that they can find a buyer for these properties, despite the sharp decline nationally in real estate prices in recent months. Experts however, have suggested that the city's asking price of $90 million for the property, located in the Parramore neighborhood, may be a little steep.

"The value was probably inflated to start with, and it certainly would have gone down since," William Weaver, a finance professor at the University of Central Florida specializing in real estate valuation.

Orlando Mayor Buddy Dyer has reassured the public that the new venues are contingent on the sale of the old ones. Construction on the Arena is expected to start in August of this year and the PAC is scheduled to have a ground breaking in late 2009. – CelebrityAccess Staff Writers