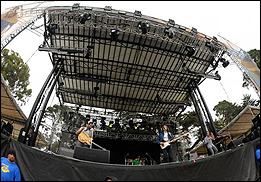 SAN FRANCISCO (CelebrityAccess MediaWire) — The Outside Lands Music and Arts Festival came to a close on Sunday, but not before more than 80,000 fans turned out for the two-day event.

Spread across four stages, the festival featured a lineup that included The Strokes, Kings of Leon, Further, with Phil Lesh & Bob Weir, Gogol Bordello, Tokyo Police Club and the Temper Trap among the approximately 40 bands that performed throughout the weekend.

According to the San Francisco Chronicle, festival-goers enjoyed reasonably good weather and less congestion than in previous years, but event organizers also had to contend with fans again, storming the festival fence, as in previous years.

The festival had been a three day event in years past, but in light of the difficult summer touring season, festival producers Another Planet Entertainment trimmed a day off the event and added additional options for affordable tickets.

"The landscape this year has been a little more challenging," Another Planet vice president Allen Scott told the Chronicle. "But our daily counts [were] bigger than last year."

Scott went on to note that Another Planet intends to return to the three-day format for next year.

"We want to do this for 20 years," Scott added. "This is a long-term goal for us. We want it to be an iconic event in San Francisco." – CelebrityAccess Staff Writers