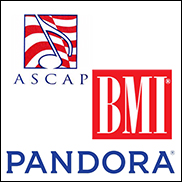 NEW YORK (Hypebot) – After scoring direct licensing deals with many of the world's biggest music publishing companies, Pandora has cut its most important deals yet – separate multi-year licensing agreements with both ASCAP and BMI.


Pandora announced the signing of two separate multi-year licensing agreements for the combined million track catalogs on ASCAP and BMI, the world’s largest Performance Rights Organizations (PROs). Pandora has also agreed to withdraw its appeal of the May 2015 order in the BMI rate case.


While the specific terms of both multi-year agreements remain confidential, both sides call the deal :an innovative approach to public performance licensing." According to a joint statement, "it allows both ASCAP and BMI to further their goal of delivering improved performance royalties for their songwriters and publishers, while Pandora will benefit from greater rate certainty and the ability to add new flexibility to the company's product offering over time."


The public performance royalties Pandora also pays to rights holders of master recordings are not affected by this agreement.


“This agreement is good news for music fans and music creators, who are the heart and soul of ASCAP, and a sign of progress in our ongoing push for improved streaming payments ASCAP and BMI for songwriters, composers and music publishers that reflect the immense value of our members’ creative contributions,” said ASCAP CEO Elizabeth Matthews.


“We’re extremely pleased to reach this deal with Pandora that benefits the songwriters, composers and publishers we are privileged to represent,” said Mike O’Neill, President and CEO, BMI. “Not only is our new agreement comparable to the other direct deals in the marketplace, but it also allows us to amicably conclude our lengthy rate court litigation and focus on what drives each of our businesses – the music.”


“At Pandora we are delivering on our commitment to ensure that music thrives,” said Brian McAndrews, chief executive officer of Pandora. “These collaborative efforts with the leading Performance Rights Organizations, as well as our recent direct deals with several music publishers demonstrate our progress in working together to grow the music ecosystem.”