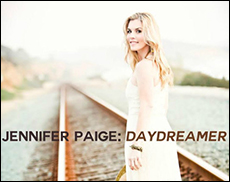 SANTA BARBARA (Hypebot) – Jennifer Paige has a unique view of the music industry. A product of the major label system, her 1998 single “Crush” hit #1 in 16 countries, selling more than 11 million copies worldwide and going 5x platinum . Now, Paige is a successful indie artist and podcaster, doing all of the things that DIY musicians do, including a current Kickstarter campaign for her next release.


I remember standing in the rain waiting for Michael Jackson to come outside the backstage door – but he never did. Aww, poor little 9-year old me. Luckily, a really sweet backstage hand DID bring me his towel from the concert, which hung on my bedroom wall next to his posters and Tiger Beat clippings. I sent him fan mail and invited him to dinner on many occasions. I love thinking back to that feeling of being a true fan. It has come in handy many times throughout my career on long days in these ever-changing tides called the New Music Industry.


I grew up in the industry during a time when the allure of an “artist” was the mystique. The record label executives would hire security to move artists along through crowds as if we might get attacked, or worse, hugged by a fan. So fans might wait for hours outside the hotel to get a quick glance as their favorite artist scurried along into a black limousine.


I Jen paige live've experienced this myself as an artist, and to be honest, it always made me feel awful. I knew It would take so little to make that person’s day/month, maybe even YEAR. But knowing the fans wasn’t the record label’s priority – getting to the radio station on time was. So off we’d rush to the station with a hurried wave and a smile.


That was then, a bygone era for the music industry and for me personally. Originally signed to Edel / Hollywood Records, I made my first 2 albums under the major label system at the very peak of their power. You might remember me from the era of MTV and terrestrial radio, especially from my biggest hit, Crush. I moved on to an indie label called Glor, who were a group of investors inexperienced in actually putting out records. That experience served as the natural transition towards independence, especially with the recording and self-release of my Holiday record via iTunes (and now as an instant download on my current Kickstarter).


Making Holiday — my first attempt at an indie release — restored my love of music and reminded me how great it feels to SING. Not for record deals. Not for royalties. But simply for the love of it.


In my 15 year career, I’ve experienced the entire spectrum from major label pop princess to DIY indie misfit. It’s been a roller coaster of a ride with high highs and low lows but I feel fortunate to have earned a unique perspective on our rapidly changing industry through personal experience.


I’ve learned that in order to stay relevant I had to jump in and get a little dirty – try new things, like Periscope and Youtube Live, things that made my palms a little sweaty like when I first began singing live on stage.


I’ve become more Internet and social media savvy, a better leader and a better business person. Instead of waiting for others to do things for me, I’ve expanded my areas of expertise which has caused me to step outside of my comfort zone from hiding behind my microphone and my songs. At this point, I think I know more about Facebook algorithms and Mailchimp settings than I care to admit; but, the bottom line is, I no longer expect my music to speak for me – I’ve learned to speak for myself in other ways, as well.


Such as my podcast, The Breakthrough Artist. My aim with this podcast was to provide a resource for up-and-coming artists. But I’ve been most surprised by what I’ve learned myself through the interviews. These guys speak to the world of music technology innovation, growth marketing and a general thinking outside the box.


If someone had told me in 2001 that I would be asking my fans to pre-order my album and “limited rewards” months before release, I would have thought they were nuts. But taking a leap of faith on Kickstarter has rewarded me with a better relationship with my fans, who have become more like friends than fans, at this point. I recognize their names and I often know details about their lives. I feel a sense of community around my artistry that goes well beyond the music.


It’s this community that will potentially allow me the opportunity to make my 5th album, Daydreamer. No questions, no red tape, no pre-approvals. Just a singer/songwriter, a producer and a microphone. Could it really be that simple?


It’s a digital world, to say the least. As much as everyone likes to harp about this new music industry, I for one would like to make it known that I like it better this way. I get to hug my fans and speak for myself. These days, I can write a song, record it and share it with the world all in the same day. I wouldn’t have it any other way.