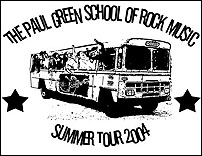 (CelebrityAccess MediaWire) — Paul Green, the real-life inspiration for Jack Black's character in last year's School of Rock film, is heading out with 24 of his top students (ages 12-17) from his Philadelphia area schools on a 16-day, 17-show tour, that Green booked himself.

The Paul Green School of Rock Tour kicks off August 7 in Los Angeles and winds down August 21 in Las Vegas. The tour is divided into two separate programs. Depending on the venue, the students will play a full two-hour, two-set performance of either: Classic Rock Hits (Led Zeppelin, Floyd, Queen, Yes, King Crimson, etc.) or The Music of Frank Zappa, featuring former Frank Zappa front man Napoleon Murphy Brock.

“Either way, you’re in for a night of not believing what you’re seeing,” Green promises. “The kids always give a great you’ll-never-believe-what-I-saw story.”

The Paul Green School of Rock was founded in 1998 and Green plans to open more schools around the country in the coming months. It is also the subject of a feature-length documentary, to be released in early 2005 by Newmarket Films, produced by Sheena M. Joyce and Don Argot.

“My dream is to create a breeding ground for the next generation of great rock ‘n’ roll bands,” says Green. “I want the rock stars of tomorrow to be able to say they got their start at the Paul Green School of Rock.”