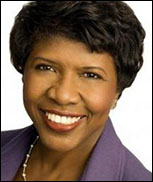 "It is with extremely heavy hearts that we must share that our dear friend and beloved colleague Gwen Ifill passed away this afternoon following several months of cancer treatment. She was surrounded by loving family and many friends whom we ask that you keep in your thoughts and prayers," PBS NewsHour said in a statement.

“Gwen was a standard bearer for courage, fairness and integrity in an industry going through seismic change. She was a mentor to so many across the industry and her professionalism was respected across the political spectrum. She was a journalist’s journalist and set an example for all around her.

So many people in the audience felt that they knew and adored her. She had a tremendous combination of warmth and authority. She was stopped on the street routinely by people who just wanted to give her a hug and considered her a friend after years of seeing her on tv.

We will forever miss her terribly.”

Ifill joined PBS in 1999 and has since covered all presidential campaigns and moderated several vice presidential and presidential debates, including co-moderating most recently the debate between Hillary Clinton and Bernies Sanders in February.

She also served as the moderator of PBS's venerable “Washington Week,” the longest-running prime-time news and public affairs program on television.

Before coming to PBS in 1999, Gwen was chief congressional and political correspondent for NBC News, White House correspondent for The New York Times, and a local and national political reporter for The Washington Post. She also reported for the Baltimore Evening Sun and the Boston Herald American. Gwen was also the best-selling author of “The Breakthrough: Politics and Race in the Age of Obama”

She received more than 20 honorary doctorates during her long career and served on the boards of the News Literacy Project, the Committee to Protect Journalists, and she was a fellow with the American Academy of Sciences. In 2015 she was awarded the National Press Club’s highest honor, the Fourth Estate Award.

She was also recognized for her work by the Radio and Television News Directors Association, Harvard’s Joan Shorenstein Center, The National Association of Black Journalists, Ohio University, Boston’s Ford Hall Forum, among many other honors.

A native of New York City, Gwen graduated from Simmons College in Boston.