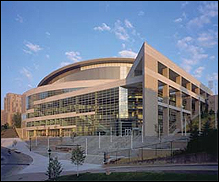 (CelebrityAccess MediaWire) — The property and facilities committee of the University of Pittsburgh's board of trustees have approved an estimated $5.6 million to replace the roof of the three-year-old Petersen Events Center.

Pitt alleges that the architects left more than 200 holes in the roof, prompting the construction of the new project. Pitt scheduled construction to begin last week and plans to complete the repairs before the school's first home basketball game in November.


The roofing problems and various other complaints marked by the school, including poor wiring, escalator troubles, temperature control problems and pipe failures, have prompted the school and the Pennsylvania Department of General Services to file a lawsuit against the roof's manufacturers, architects and the original contractor. The University also argued that alleged construction and design problems led to inadequate ventilation and problems with the sprinkler and communication systems.

In a statement reported by The Pitt News, Vice Chancellor of Public Affairs Robert Hill said that the replacement is necessary in order to correct problems with leaking and water damage caused by the original roof. Hill refused to comment on aspects of the construction project that are mentioned int he lawsuit because litigation in the case is still pending.

Several months after Pitt filed its suit, the architecture firms contersued and alleged that Pitt was responsible for the problems associated with the Petersen Center. The architects blamed the school for last-minute changes and added features to the buildings.

Documents in the countersuit detail the firms complaints against the University and the State.


"The Department of General Services demonstrated that it wanted the cost of the project to be reduced without eliminating items from the design," the counterclaim stated, according to the paper. "The DGS had an unattainable goal."

The Post-Gazette reported that a roofing engineer hired by the building's architects claimed that 70 percent to 80 percent of roof is fully operational and that the University refused to consider less drastic options before approving plans to replace the entire roof.

Hill responded to the claims in an interview with the paper.

"The state did not contract for a 70 percent effective roof," he said. "The roof is not functional and we intend to retrieve the damages in a lawsuit." –by CelebrityAccess Staff Writers