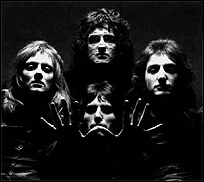 (CelebrityAccess MediaWire) — Thirty years since their first UK #1 album “A Night at The Opera,” Queen has overtaken the Beatles in this Top 10 for the first time. That’s the news from the new research by the team behind the popular music annual “The Book of British Hit Singles & Albums.”

According to British Hit Singles & Albums’ database of official UK chart statistics, Queen has spent 1,322 weeks on the UK albums chart (29 weeks more than the Beatles). With sales figures unreliable in the '50s, '60s and '70s, the “weeks on chart” figure represents the fairest, most accurate method of ranking acts, according to David Roberts, editor of the book published by Guinness World Records Ltd.

Top 10 Most Successful Acts of All Time on the UK Albums Chart:

“Given that Queen’s chart career has been much shorter than those of The Beatles and Elvis, this is an incredible achievement," Roberts said. "They’ve long been written about with reverence in the pages of ‘British Hit Singles and Albums’ and this just serves to cement their legendary status.”

Queen winds up their current 32-date European tour with Free/Bad Company singer and musician Paul Rodgers on July 8 in Hyde Park where they will be joined by joined by Razorlight, Peter Kay and special guests Justin and Dan Hawkins of The Darkness. This is the same site where Queen performed one of the most historic of their earlier concerts when they played a free concert nearly 29 years ago, attracting a record crowd of more than 150,000.

Queen also holds a number of records officially recognized by Guinness World Records, including having the biggest selling Greatest Hits album in the UK with “Greatest Hits 1” (now over four million). They are also the only act to top the chart with the same single twice – “Bohemian Rhapsody” – selling a million copies both times. The single, which celebrates its 30th anniversary later this year, was also voted the favorite single of all time in a poll conducted by readers of “British Hit Singles & Albums” and is also the biggest selling non-charity single of all time.– Jane Cohen and Bob Grossweiner