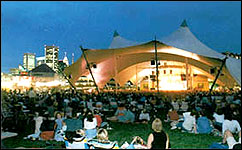 BALTIMORE, MD (CelebrityAccess MediaWire) — The city of Baltimore has asked live entertainment companies to submit proposals for a redesign of the Cavalier Telephone Pavilion at Pier Six, an outdoor nylon-roofed venue in the city’s Inner Harbor.

“We are looking for a new use of the venue — it could be to expand what we have here, it could be to actually tear down this building and rebuild a new one, or to really upgrade the facility,” Tracy Baskerville, communications director for the Baltimore Office of Promotions, told local news station WBAL. “The Inner Harbor is forever changing and we want to keep up with things that are new and things that are different — we really want to make use of this facility.”

The 4,700-capacity pavilion was first built in 1981, and later renovated in 1991. It has served as a stage for many acts, but would like to attract the higher-profile artists that usually go to the nearby Merriweather Post Pavilion.

Currently, the venue is run by Clear Channel Entertainment and Baltimore developer The Cordish Group, but the contract expires in October. CCE is expected to submit a proposal to keep control of the facility.

The venue, which is open from only May through September because of the open air style, is looking for a redesign proposal that would extend the season from April through October to increase revenue. –by CelebrityAccess Staff Writers