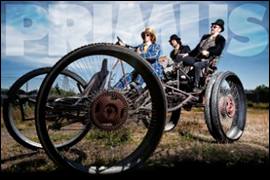 LOS ANGELES (CelebrityAccess MediaWire) — After finishing up a round of summertime shows with Gogol Bordello, Primus will bring back the Oddity Faire Tour for the second consecutive year this fall.

The funk-rock group will venture across the continent beginning with a July 27 show in Toronto and run through an Aug. 15 stop in Santa Barbara, CA.

After that road trip, the band will embark on the second annual Oddity Faire, kicking off the nomadic event Sept. 14 in Sacramento, CA, and moving throughout the western portion of the nation through an Oct. 3 gig in Detroit.

Primus' eclectic and eccentric bassist singer/bassist Les Claypool created the Oddity Faire Tour last year in an effort to bring together a group of artists that, as he put it, "dwelled outside the box and broke beyond the parameters set by the safe pallet of the mainstream," according to a press release.

Earlier this year, Claypool and guitarist Larry LaLonde announced the reformation of the original Primus lineup with drummer Jay Lane.

Until the start of this year, Lane had been playing with former Grateful Dead members Bob Weir and Phil Lesh in their new rock band Furthur. Lesh confirmed Lane's departure in a mid-May announcement on the PhilZone message board, writing, "I will miss Jay’s enthusiasm and ebullience; he’s a great guy to hang and play music with," according to TicketNews.