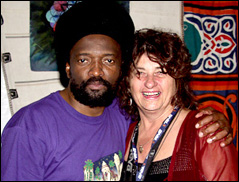 HUMBOLDT, CA (CelebrityAccess MediaWire) – The Eureka Reporter states that Heather Jessica Lake, 30, missed the Snoop Dogg concert she promoted after she was arrested Oct. 24, the day of the show, on suspicion of three felony charges resulting from a search warrant executed at her Southern Humboldt residence. Eureka attorney Greg Rael further identified Lake as the daughter of Carol Bruno, a co-founder of People Productions and a major force behind the Reggae on the River and Reggae Rising music festivals, along with the more recent Snoop Dogg concert.

Nelsen said Lake identified herself as an employee of People Productions and promoter of the Snoop Dogg concert and an after-party — although Nelsen said the arrest was unrelated to the show.

Lake, who spent almost a week in jail, was released from custody Wednesday after persuading a judge that she would show up for scheduled court appearances.

At a bail hearing Wednesday, Rael read to the judge statements from 18 letters submitted in support of Lake’s release on her own recognizance, including one from the chief of a Southern Humboldt fire department who wrote that Lake was “honorable and trustworthy and will remain here in the community to face the charges” against her.

Rael argued that Lake would not pose a flight risk if released on her own recognizance, telling Superior Court Judge Christopher Wilson, “Despite the seriousness of the charges, we have a woman who is deeply rooted in this community. She is as connected to Humboldt County as she can be.”

Bail had been set at $100,000, and investigators in the case had filed a declaration requesting that any bail funds posted be rejected unless a judge could determine that the money was not feloniously obtained.

Humboldt County deputy district attorneys argued Tuesday at Lake’s arraignment and again Wednesday at the bail hearing that they believed Lake had profited far beyond the $12,677 found during the search.

“I don’t think that this is a small operation,” said Deputy DA Maggie Fleming.

Wilson agreed with the defense.

“I don’t find that she’s a risk of flight,” he said, and released Lake on her own recognizance.

Lake is scheduled to appear for a preliminary hearing Nov. 27 at 8:30 a.m.

In an unrelated case, the Eureka Police Department took a report Monday stating that video game equipment valued at $1,150 had been stolen from Snoop Dogg’s dressing room at the Eureka Municipal Auditorium.

People Productions was the victim of the alleged crime, said EPD Public Information Officer Suzie Owsley, who added that the reporting party was unable to provide serial numbers of the missing equipment.