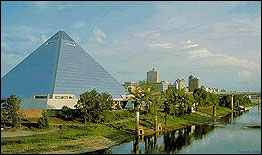 MEMPHIS, TN (CelebrityAccess Staff Writers) — Alan Freeman, general manager of The Pyramid in Memphis, Tennessee, has come up with a creative solution to solve his biggest of problems.

The Memphis Grizzlies, an NBA team that manages Memphis’ FedExForum, scored a non-compete clause as part of their deal with the city, blocking events at The Pyramid and the nearby Mid-South Coliseum, severely damaging their ability to book concerts, family shows and other events at the venues.

"For instance, they've got Disney on Ice this weekend," Freeman said. "If we had a show that didn't attract anywhere close to the same type of audience as Disney on Ice, that's the type of show I want to be able to have permission to do."

After presenting his plan to the County Commission’s public service and tourism committee, chairman John Willingham said, “I hope that a dialog can be opened.”

The Grizzlies have argued that any national events at The Pyramid or Mid-South Coliseum – even if they don't compete with a Grizzlies-staged event – would financially hurt the FedExForum, for which taxpayers are at risk if dedicated revenue streams fall short.

The Grizzlies received the noncompete clause in 2001 negotiations with the city and county. In return, the Grizzlies accepted responsibility for the building's operating losses. –by CelebrityAccess Staff Writers