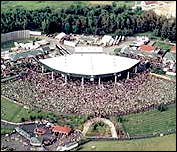 (CelebrityAccess MediaWire) — Clear Channel Entertainment has taken another step in fighting noise regulations around its Germain Amphitheater in Ohio.

An executive with Clear Channel Entertainment, which owns and operates the shed, sent a letter to Columbus City Council President Pro Tem Michael Mentel dated January 25, asking that the city rescind its 1999 agreement to allow the town of Westerville to impose its noise ordinance on the venue.

According to Ohio’s This Week newspaper, Michael Wasylik, Westerville's assistant city manager, said Clear Channel has attempted a political end-run — something he said it tried a few years ago, but was unsuccessful. Westerville is seeking an injunction to force Germain Amphitheater to comply with its noise ordinance.

Westerville was making what Wasylik called "great progress" in its negotiations with those representing the amphitheater.

"We were trying to come to an agreement before (going to) court in March," he said on Feb. 10.

He told the paper that those discussions, which took place in December, completely stopped in January.

The 12-page letter from Clear Channel executive vice president and general counsel Dale Head, said that Westerville has amended its noise ordinance three times after the 1999 agreement was made. He also mentioned that Germain has worked to reduce concert noise levels in Westerville neighborhoods, and that Westerville “wants Germain to endanger concertgoers by turning off the power on non-compliant artists.”

Wasylik told the paper that Westerville wants the sound turned down at the amphitheater, not off.

"If 95 percent of concerts can be good, why can't they all be?" he asked. "I think they have tried to comply, and we think they can comply."

Mentel told This Week that he personally had not been in contact with anyone from Westerville about the issue.

He said he has "serious concerns," based on the letter from Clear Channel. –by CelebrityAccess Staff Writers