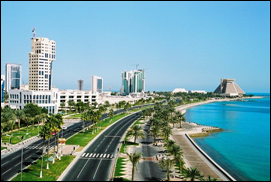 DOHA, QATAR (CelebrityAccess MediaWire) — The new $660 million dollar National Convention Center currently under construction in Qatar is on track and officials expect it to be 40% complete by the end of the year with final completion coming in 2010, the Peninsula Reported.

Qatar is skirting the usual route of attracting tourists and is instead hoping to become the go-to location for conventions, sporting events and major meetings.

Paul D' Arcy, General Manager of the Center, told The Peninsula "With the Convention Center, Qatar can benefit not just through prestige but economic impact as well. Delegates tend to spend far more than leisure visitors."

Managed by AEG, the Center will feature 57 meeting rooms and 40,000 square meters of exhibition space. It will include a hall that can accommodate 4,000 patrons, a 2,500 capacity auditorium as well as a 500 seat theatre.

In addition to conventions, the facility is intended to be used for concerts, theatre productions and other forms of the lively arts. – CelebrityAccess Staff Writers