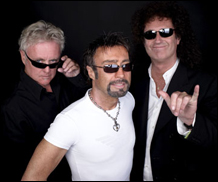 LONDON (VIP NEWS) — As expected, Queen + Paul Rodgers will embark on a four-month European tour this fall in support of its new as-yet-untitled studio album, scheduled for release in Britain on Sept. 1 via EMI.

The 28-date "Cosmos Rocks Over Europe" arena tour, which visits 14 countries, begins Sept. 16 with a two-night stand at Moscow's SCO Olympic Arena in Russia. The first leg of the trek will visit cities in Poland, Germany, France, Italy, Switzerland, the Netherlands and throughout the United Kingdom. Tickets in Britain will go on sale April 5.

The jaunt's second leg continues through early November with stops in Spain, Hungary, Serbia, the Czech Republic and Austria. The tour is expected to wrap at the end of 2008 with a visit to South America.

Hollywood Records will release the new album in North America. A release date is still being finalized. Additionally, tour dates for the United States and Canada are still in the works, according to a spokesperson at Hollywood Records.

Last November, Rogers told Billboard.com that he and Queen's Brian May and Roger Taylor were writing new material individually and "are working towards actually writing together as well."

Each of them were taking turns playing bass, and while Rodgers was inserting the blues and R&B influence that's so much a part of his style, he says May has been carefully orchestrating the "whole orchestra of harmonies" that are Queen's hallmark.

Queen + Paul Rodgers began touring in 2005 and released a live album and DVD, "Return of the Champions," in 2006 before playing shows in North America.