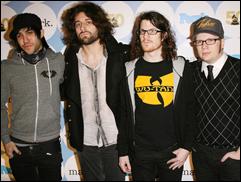 NEW YORK (CelebrityAccess MediaWire) — Pete Wentz of Fall Out Boy has decided to be the first band to play all seven continents and will be playing in Antarctica next.

March 25 is the date for this icy part of their tour and they will be playing a scientific colony.

The show is a bid to enter the Guinness Book of World Records as the only band to play a concert on all seven continents in less than nine months.

A film crew will document the trip as part of a piece on the effects of global warming and a Guinness Book representative will accompany the band to validate the world record.

Bass player Pete Wentz, who came up with the idea for the trip, says he is looking forward to visiting Antarctica, not only for the concert, but for the wildlife.

"I was just sitting around and wrote our manager an email saying, 'Let's be the first band to go to all five continents' – only he wrote me back, 'There are seven,' " Wentz told MTV News.

"Since then we have been working on it. Lately it's kind of gone into overdrive though, because after this flight to Antarctica there really aren't any other ones we could get on until winter ends. And yes, we'll be seeing penguins." –by CelebrityAccess Staff Writers