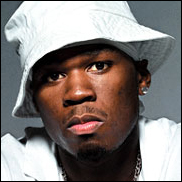 SANTA MONICA, CA(AP) — Rapper 50 Cent's record label is the latest to try to do an end-around to avoid bootleggers.

Interscope Records said it will release the album "Get Rich Or Die Tryin'" on Thursday, instead Feb. 11. The label said the release date for the Eminem protege's album is being moved up because of bootlegging, piracy and overall demand for the album.

50 Cent said he's "excited that the streets are anxious" to get his album, adding that if he catches any bootleggers, "they gonna have to deal with me."