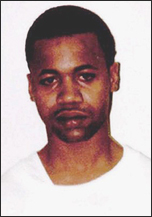 NEW ORLEANS (AP) — Terius Gray, better known to rap music fans as Juvenile, was arrested on drug charges with three other people when police smelled, then saw, two burning marijuana cigarettes in the car they were in.

Gray was a front seat passenger in the rented Lincoln Town Car stopped Wednesday at a New Orleans intersection where police had set up a checkpoint to make sure drivers were carrying proof of insurance.

"Officers detected a very strong odor of burning marijuana coming from the vehicle," Sgt. Paul Accardo, a police spokesman, said in a news release. "Officers then observed two, still burning, marijuana cigarettes in the ashtray and subsequently arrested all four occupants for possession of marijuana."

The men were later booked with possession of cocaine after officers found a small amount of cocaine in the trunk of the car, Accardo said.

Gray, 27, also faces a simple robbery charge from an incident in September. Police said two of Gray's associates took $200 from a barber whom Gray had accused of bootlegging a Juvenile compact disc.

Gray's address is listed in LaPlace, a bedroom community west of New Orleans. His telephone number was not listed and he could not be reached for comment.