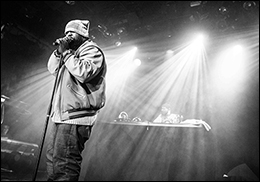 NEW YORK (CelebrityAccess) — Brooklyn rapper Sean Price, a fixture in the underground hip hop community, died in his sleep on Saturday. He was 43.

According to the New York Post, there is no known immediate cause of death.

"It is with beyond a heavy heart that Duck Down Music is sadly confirming that Sean Price passed away early this morning in his Brooklyn apartment, Saturday, August 8th, 2015. The cause of death is currently unknown, but it was reported that he died in his sleep. He’s survived by his wife, and his three children.

"Sean Price, who turned 43 in March of this year, was a beloved rap artist. He was 1/2 of the group Heltah Skeltah, a key member of the Boot Camp Clik, and a successful solo artist, known simply as Sean Price.

"Sean's family and friends are asking for time to grieve and process the news. Further details will be issued when more information is available."

A lifelong resident of the Brownsville neighborhood of Brooklyn, Price first made a name for himself as as a member of Heltah Skeltah, but quickly gained a reputation as a solo artist as well. In 2005 he released his first solo album "Monkey Barz" followed by "Jesus Price Supastar" in 2007. His most recent album, "Mic Tyson" was released in 2012 and he was in the studio working on a mixtape that was due to be released later this month.

Price is survived by his wife and three children, according to his representatives. – Staff Writers