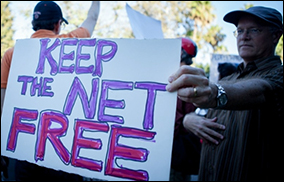 (Hypebot) –
Although Google and Netflix have both abandoned their defense of net neutrality, other also major internet companies are planning to come together in a 'Day of Action' on July 12th to protest what would seem to be the inevitable dismantling of the popular consumer supporting legislation.

So as we've been noting, a lot of people remain under the impression that companies like Google and Netflix still support net neutrality, and they'll be rushing in any moment now to help thwart the FCC's latest attempt to kill the rules. In reality, Techdirt readers know that Google hasn't actually supported net neutrality since around 2010 or so. Netflix, also perceived as a consumer ally on the subject, made it clear recently that it no longer sees the need to fight for net neutrality now that it's an international video powerhouse. The company's shift from disruption engines to slightly myopic legacy turf protectors should surprise nobody.

That said, Google and Netflix's departure from the conversation left many net neutrality advocates wondering if any bigger companies would be willing to lend a hand in the latest chapter in the debate. Amazon managed to answer that question this week by throwing its weight behind a July 12 "Day of Action" being coordinated by consumer advocacy group Fight For the Future. According to the group's website, Amazon will join Reddit, Etsy, the ACLU, California ISP Sonic, Mozilla, Kickstarter, BitTorrent, Github and Vimeo for a day of protest — both online and off — against the FCC's plan to gut the popular consumer protections.

The plan appears to be to mirror the Internet Slowdown Day back in 2014. You'll recall that that effort, which involved numerous major websites warning their visitors about the threat to net neutrality via site banners, helped convince Tom Wheeler to stop half-assing things, and classify ISPs as common carriers under Title II of the Communications Act (giving them the adequate legal authority to enforce the rules). His decision was subsequently supported by the courts.

The problem, of course, is that Tom Wheeler was a bit of a rare bird in technology government policy circles. In that when presented with quality evidence that conflicted with his world view, he was actually willing to change his position and do the right thing — even in the face of giant ISP lobbying pressure. It's part of the reason that Wheeler went from dingo to internet hero in relatively short order, breaking free of a long line of timid, bipartisan telecom industry sycophants heading the agency. There's zero indication so far that new FCC boss Ajit Pai has any of the qualities that made Wheeler popular.

Still, the companies and consumer advocacy firms hope the effort can still generate something vaguely resembling SOPA-esque accountability for Pai's plan to ignore the public interest and kill the rules:

"The effort is led by many of the grassroots organizations who have organized the largest online protests in history including the SOPA blackout and the Internet Slowdown," notes Fight the Future. "The day of action will focus on grassroots mobilization, with public interest groups activating their members and major web platforms providing their visitors with tools to contact Congress and the FCC."

The FCC is fielding comments on its plans to kill net neutrality until August 18, ahead of a finalizing vote to kill the rules later this year.