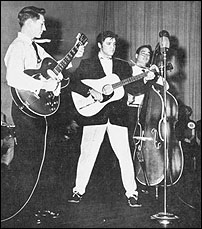 CelebrityAccess MediaWire) — Resource Entertainment Group (REG) has been contracted by Sun Studio to produce the 50th Anniversary of Rock 'n Roll Reunion on July 5 at the legendary Sun Studio in Memphis.

July 5, 1954 is considered the "big bang" of
rock 'n roll, when Scotty Moore, Bill Black, and Elvis Presley recorded "That's All Right" at a tiny recording studio near downtown Memphis. Fifty years later, the day will start with "The Global Moment in Time," as Scotty Moore will broadcast the historic song from Sun's control room. Hundreds of radio stations worldwide are expected to air the song simultaneously, resulting in the largest broadcast of the same song in radio history.

The rest of the day's festivities will include a massive outdoor party, culminating in a reunion concert in front of Sun Studio in the evening.

"Resource Entertainment Group is honored to produce this event that celebrates a moment so important to Memphis and the world's modern musical heritage," said REG President, Howard Stovall, who was recently profiled on CelebrityAcess (May 28, 2004). — Jane Cohen and Bob Grossweiner