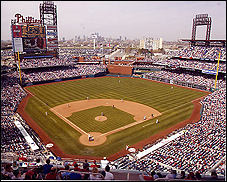 Bram Reynolds as their new general manager and Carolyn White as the new operations manager at the Philadelphia Phillies' Citizens Bank Park.

Reynolds, who began his career at Global Spectrum as an intern in the Operations Department of the Wachovia Complex in Philadelphia, previously was operations manager at Citizens Bank Park. He replaces Global Spectrum Regional Vice President Tim Murphy, who was named general manager of both the Wachovia Center and Spectrum.

White had been facility coordinator at the ballpark since 2004. She joined Comcast-Spectacor in 2004 as an administrative assistant for the Philadelphia Charge and the Philadelphia Kixx, outdoor and indoor soccer teams, respectively. She moved to Global Spectrum when the company was awarded the contract to oversee Citizens Bank Park.

"Global Spectrum has done a phenomenal job of helping us provide our fans with the ultimate experience at Citizens Bank Park," said Michael Stiles, Phillies senior vice president for Administration and Operations. "Bram and Carolyn are extremely dedicated and they both work tirelessly at the ballpark to serve our fans, our players and our staff."

"We're very proud of both Bram and Carolyn as they are two of our many success stories of individuals who have grown through the company," said Global Spectrum Chief Operating Officer John Page. "We continuously train and grow our employees to provide them with growth opportunities. This is another great example."
–Bob Grossweiner and Jane Cohen