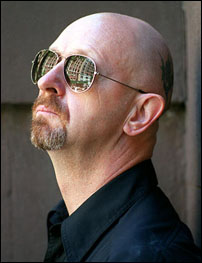 NEWARK, N.J. (AP) _ Rob Halford and the original members of the pioneering heavy-metal band Judas Priest will reunite for a world tour and a new album next year.

After a 12-year solo career, Halford disbanded his self-titled band and rejoined the group that cranked out metal classics such as "You've Got Another Thing Coming," "Living After Midnight" and "Hell Bent for Leather."

"All the grace, majesty and power you experienced with Judas Priest is about to happen again," Halford told The Associated Press Friday. "We want to go out there and slay people, and have them walking out of the building going, `Oh my God!'"

Halford, who is gay, said speculation that he's HIV-positive is "a very distasteful rumor."

"I have lost close friends to HIV and it's a disservice to them," the 51-year-old singer said. "I want everyone to know that I am 100 percent healthy and I've never felt better."