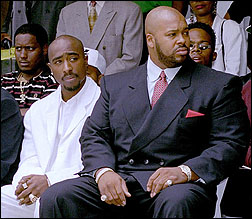 LOS ANGELES (AP) — When rap pioneer Marion "Suge" Knight was released from prison two years ago, he vowed to return Death Row Records to the top of the charts.

At the time, he told The Associated Press that it was "time for great records."

It hasn't happened. Aside from two albums of old Tupac Shakur material, Death Row has produced next to nothing. And for the second time this year Knight was behind bars, awaiting a hearing on a suspected parole violation.

Some wonder if Knight — who helped muscle rap into the mainstream a decade ago with superstars such as Dr. Dre, Snoop Dogg and later Shakur — is still a force in the music industry.

"He has to prove himself all over again," said Erik Parker, music editor of Vibe magazine. "As time slips by, people care less. There's no production, no real hits."

Knight said his company was "going 1,000 mph" after his prison release, but spokesman Jonathan Wolfson acknowledges it has yet to regain its previous notoriety.

"Are we the Death Row of 1994? No," Wolfson said. "But we could easily get to that point again. Suge made it happen once, and sometimes lightning can strike twice."

Knight's label has undergone several name changes and is now officially known as Death Row's Back. It has released three albums since early 2001. Two featured previously unreleased material by Shakur, who was killed in a 1996 drive-by shooting in Las Vegas with Knight by his side.

While these releases have earned millions for Knight, his stash of Shakur songs is dwindling and there's no replacement in sight. Death Row's only non-Tupac release since 2001 was the "Dysfunktional Family" movie soundtrack, which sold 36,000 copies in limited release.

Death Row's Crooked I has released a single, but his album "Say Hi to the Bad Guy" won't hit stores until at least September. Other records by Kurupt and Lisa "Left Eye" Lopes, the TLC member who was killed in a car crash last year, don't have firm release dates either.

In April, Knight told MTV that he wasn't going to rush the releases. "We're not under pressure, under the gun or nothing," he said. "Anytime you do something, it's important that you be happy with it."

Wolfson said Knight was not conducting interviews while in jail.

Knight, 37, was jailed on June 27 and could face up to a year in prison if state officials revoke his parole for allegedly punching a parking lot attendant outside a Hollywood nightclub. Attorney Rose Kogeman said Knight was not involved in the altercation.

The state Board of Prison Terms will hold a hearing in the coming weeks to determine whether Knight must return to prison for the second time this year. In February, he completed 61 days behind bars for associating with a known gang member in violation of his probation.

The lost time has taken a toll. "Projects have had to be bumped back because he's the main thrust and catalyst," Wolfson said.

A number of music industry executives did not return calls seeking comment about Knight, whose strong-arm tactics had much of the industry fearing for their safety during Death Row's heyday in the mid-1990s. Several executives said it was against company policy to comment about competitors.

After founding Death Row with charter N.W.A. member Dr. Dre in 1992, his label sold 25 million records and raked in $170 million in its first four years.

The flood of cash, plus Knight's violent reputation, made Knight the most notorious rap executive ever.

The 6-foot-3, 315-pound Knight grew up in Compton, a city on the south edge of Los Angeles, in a neighborhood controlled by Blood gangs. As his career progressed, Knight surrounded himself with Bloods and wore red at every opportunity.

A truck driver's son, he was the youngest of three children and earned the nickname "Suge," short for Sugar Bear.

He excelled at football, playing defensive lineman in the mid-1980s at the University of Nevada at Las Vegas, where he was known as a hard worker who could motivate teammates.

After failing tryouts with the Los Angeles Rams, Knight formed a small music publishing company that made a mint in the early 1990s by owning the rights to flash-in-the-pan white rapper Vanilla Ice. Vanilla Ice later accused Knight of dangling him over a balcony to gain control of the publishing rights to his only hit, "Ice Ice Baby."

N.W.A. founder Eazy-E, whose real name is Eric Wright, also accused Knight of violent tactics. Eazy-E said Knight and a crew of thugs threatened him with lead pipes to force Eazy-E to release Dr. Dre from his contract.

In a separate case, Knight was convicted of assault in 1992 for pistol-whipping a man in a recording studio. He received probation on a nine-year suspended sentence.

In September 1996, Knight violated that probation and was imprisoned for five years after he and several associates, including Shakur, were caught on videotape beating a gang rival in the lobby of the MGM Grand Hotel in Las Vegas. Shakur was shot and killed three hours later as he was riding in a BMW with Knight, who was wounded.

Since then, there have been numerous published theories about the killing of Shakur and the slaying seven months later of his bitter rival Christopher "The Notorious B.I.G." Wallace. These theories include that the gang rival who was beaten in the MGM Grand killed Shakur for revenge, and that Knight was afraid Shakur was about to leave Death Row and demand millions in unpaid royalties.

Knight has never been named a suspect in the Shakur or Wallace slayings and has denied involvement.

Shortly after being released from prison in 2001, he told The Associated Press that Shakur had no intention of leaving Death Row.

"Tupac loved Death Row Records," Knight said. "Even to his last recording, his last interview, he praised it. I loved him. I would never bring harm to him."

With his biggest stars long departed and his label's luster fading, Knight's rebuilding effort remains a work in progress.

"There was a buzz around Suge Knight's release from jail," said Parker, the Vibe music editor. "But he hasn't been able to match it with music yet."

* Nov. 5, 2001: Two of Knight's bodyguards arrested after a fight with security officers at Death Row offices. They are booked for investigation of possession of a stolen firearm.

* Jan. 8, 2002: Misdemeanor charges filed against Death Row for failing to pay taxes on $825,716 in income generated between Dec. 1, 1995, and Nov. 30, 1996. Knight blames a former accountant, whose firm paid an $8 million settlement to Death Row after a legal battle. Death Row agrees to pay $100,000 fine and reimburse the government an unspecified amount of unpaid taxes.

* April 3, 2002: Alton McDonald, 37, a former production manager for Death Row, is fatally shot at a gas station. McDonald was with Knight and Tupac Shakur when the rapper was gunned down in Las Vegas in 1996.

* July 2002: The Internal Revenue Service sends Knight $6 million income tax bill regarding taxes owed in 1997, when he was serving a five-year prison sentence for violating probation. Attorney says Knight would pay the bill.

* Oct. 16, 2002: A former Death Row employee is shot to death in Los Angeles in what police call a gang-related shooting. Henry Smith, 33, had worked as a graphic artist for the label.

* Nov. 14, 2002: Knight's record company and homes are searched for weapons that police believed may have been used in a gang-related killing. Authorities say Knight was not a suspect. Three people are arrested then freed pending further investigation.

* Dec. 23, 2002: Knight is arrested for allegedly violating his parole by associating with reputed gang members. Knight denies the claim and said authorities were pressuring him to talk about a series of gang-related attacks that he was not involved in.

* Feb. 25, 2003: A parole board orders the release of Knight, dropping four of five charges of associating with a gang member.

* June 27, 2003: Knight is jailed for allegedly violating parole by punching a parking lot attendant. Attorney said Knight was not involved in the altercation. The state Board of Prison Terms will schedule a hearing to determine whether Knight must return to prison for as long as a year.