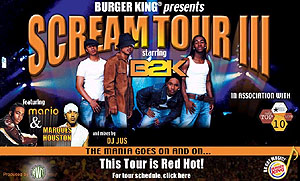 "The success of the 2002 BK Got Music summer campaign solidified this second consecutive year showcasing this program," said Vincent Berkely, senior vice president, corporate relations, Burger King Corporation. "It is in our tradition to celebrate the things which our customers value and this rich heritage of music remains an integral part of the African American and global cultural experience."

In addition to the sponsorship, Burger King Corporation will make a special donation to St. Thomas Health Services, a full-service neighborhood medical center. It is the only primary medical facility in the St. Thomas Irish Channel Community of New Orleans, Louisiana. And again for the second year, Burger King Corporation tied-in a "BK Fly Away" radio promotion where listeners to key partner radio stations in urban markets won a trip for two to the Essence Music Festival.

Scream Tour III will assemble on stage the nation's hottest teen acts and leaders in the current teen pop and boy band scene. The tour will be headlined by Epic Records' B2K, and will also feature J Records' Mario, singer/actor Marques Houston and Jive Records' actor/comedian/rapper Nick Cannon. The 40-city tour, which kicked off on July 2 in San Diego and runs through August 31, will be staged in arenas and auditoriums.

"We view these partnerships as excellent opportunities to recognize the numerous contributions of African Americans to the cultural landscape world-wide," added Berkeley. "Essence has always been ahead of the curve in identifying and celebrating the many contributions and successes of African Americans to music, the arts, business, government, sports, health, etc and we are honored to work alongside them again in this capacity. In addition, we see the partnership with B2K as a natural marriage for us in reaching a key consumer segment."