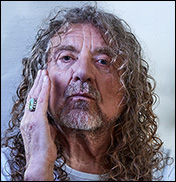 LONDON (CelebrityAccess) — Singer and musician and former Led Zeppelin frontman Robert Plant has been named as the recipient of 2018 UK Americana Lifetime Achievement Award, in recognition of his contribution to the Americana genre over the span of his career and life in music.

The award will be presented during an awards gala that will be held at Hackney Empire in London on February 1st with BBC2 Radio's Bob Harris handling hosting duties.

“We are so excited to announce that Robert Plant will be accepting our Lifetime Achievement Award in 2018. The award is our highest honour and it couldn’t be going to a more deserving recipient. Over the course of a legendary career, from his early love of blues and rock’n’roll, through the seventies with rock pioneers Led Zeppelin, to a solo career that has never stood still, Robert Plant has introduced countless millions of music lovers to American roots music," said Stevie Freeman, CEO The Americana Music Association UK.

Other nominees up for potential honors at the UK Americana Awards include Dani Nicholls, Emily Barker, Laura Marling, and Danny & The Champions of The World, who are all vying for UK Artist of the Year, and Angaleena Presley, Courtney Marie Andrews, Imelda May, and Rhiannon Giddens who are in the running for Interrnational Artist of the Year.

As well, The Bob Harris Emerging Artist Award will be given to up and coming London based four-piece The Wandering Hearts.

The full list of nominations for the 2018 UK Americana Awards

Lifetime Achievement Award
Selected by the board members, our highest honour is awarded to a UK artist, duo or group in recognition of their outstanding contribution to the Americana genre over the span of their career and life in music.The 2018 recipient will be Robert Plant.

Trailblazer Award
Selected by the board members, this special award celebrates a UK artist, duo or group that has taken an exceptional path, inspiring others to follow in their footsteps in developing the Americana genre.The 2018 recipient will be announced in December.

Bob Harris Emerging Artist Award
Selected by Bob Harris OBE, this special award celebrates the breakthrough artist, duo or group that has particularly impressed the legendary music broadcaster throughout the year. The 2018 recipient will be The Wandering Hearts.

Grass Roots Award<
Selected by the board members, this special award celebrates the sometimes un-sung heroes of the UK Americana scene. It is presented to individuals working in the industry (in a capacity other than as artists) who have made outstanding efforts to support Americana music from the grass roots up. The 2018 recipients are Alan Tyler & Steve Arlene.

Australia Throws A $250 Million Lifeline To Its Arts Community, Including Funding For Concerts And Festivals